A comprehensive review and survey of Decision Support Tools (DSTs) currently in use in the FAIRWAY case studies is described in »Survey and review of existing decision support tools. Of the 36 DSTs  identified as most relevant, 12 were selected for further investigation to see if a tool developed in a particular national context could be used or provide inspiration elsewhere (»Evaluation of decision support tools). Here we describe the tool evaluated for potential use in the Anglian Region case study.

1. Selection of DST for evaluation in Anglian Region case study

The Anglian Region Case Study covers three areas in Eastern England where surface water pesticides are found in drinking water resources (»Anglian Region, UK case study). The case study activity is a social science one. The University of Lincoln (UoL) co-ordinated surveys of farmers in the three areas to understand how different interactions with the water company, Anglian Water, might result in long term changes in approaches to understanding and responding to issues of surface water contamination with pesticides. The three areas are:

Following the sentiment for the case study of employing social science observation, and in particular the ‘engagement’ process mentioned in b) the researchers of UoL were keen to assess whether a Decision Support Tool could be used by agronomists and land managers to enhance knowledge of pesticides that can contaminate drinking water resources. The Environment Yardstick for Pesticides seemed a natural choice.

The Environmental Yardstick for Pesticides provides an overview of the environmental pressures generated by all crop protection agents permitted on the Netherlands market (see »https://www.milieumeetlat.nl/en/hoe-werkt-het-open-teelt.html). It enables the user to compare these agents and to choose the least harmful crop protection strategy. By paying a subscription the service is unlimited, but it is possible to compare up to three products at no cost. The Environmental Yardstick for Pesticides, first developed in 1990 contains data (pesticide properties and exposure models) from the Dutch Authorisation Board and European authorisation guidelines used to estimate environmental impact. It does not take into account all possibilities but the data includes environmental impact factors such as soil life, water life and groundwater leaching (using regulatory submission), compatibility with Integrated Pest Management (using Koppert data base and Pesticide Property Database) and risk to user (product label information). Variables that can be added are dosage, soil organic matter, season of application and estimate of spray drift risk. Therefore, the The Environment Yardstick for Pesticides gives a risk indication based on European authorisation guidelines. 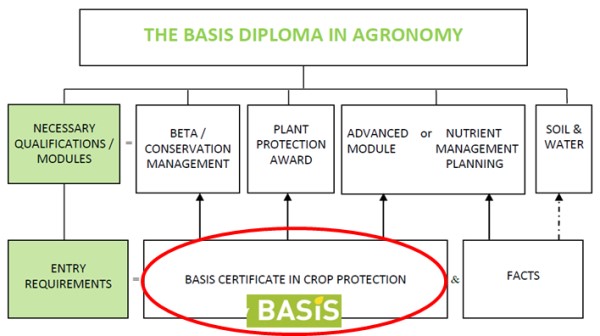 University of Lincoln researchers were able to access groups of agronomists and farmers who were attending various training courses and events held at the University. Delegates came from a wide area, but mainly from the eastern and east midlands region of England within which our Case Study areas lie. In the following results a BASIS qualified agronomist or farmer is one who has passed the BASIS Certificate in Crop Protection.

As a result of the above backgrounds, we tested the DST by means of

30 BASIS qualified agronomists and advisors (22) and farmers (7) and others (2) were surveyed to find out which were their preferred existing (in England) DSTs. We asked what they needed from a DST. One person stated they were both farmer and agronomist, 20 were male, 6 were female and 4 did not say.

We provided a choice of nitrate DSTs commonly used in England and asked which ones each person used, and to rate the products they used, where 1 = not at all useful and 6 = extremely useful. The nitrate DST results are shown in Table 13. 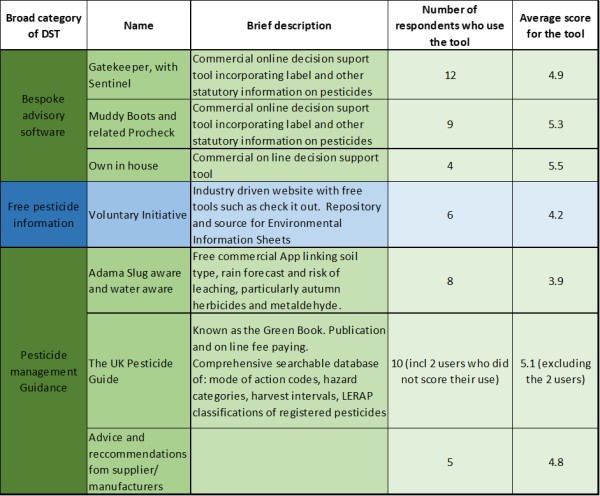 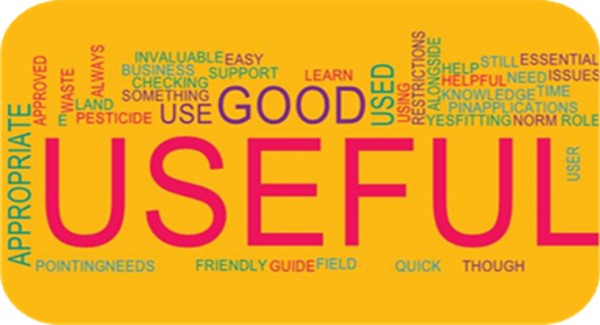 Most respondents mentioned the »Nutrient Management Guide (RB209), a long standing defra and now AHDB funded document, considered to be the authoritative source for information for fertiliser recommendations in England. 22 respondents used 1 or more bespoke advisory software and in general are satisfied with the outputs, giving an average score of 4.8 to 6. Standalone publications (apart from the Nutrient Management Guide) are used by fewer respondents. However, when asked for additional free text comments on such documents these included ‘know, but don’t use’, ‘don’t use but should’ and ‘useful but don’t use’. Overall the data suggests a move from paper-based to on-line tools.

The responses for pesticides was less clear (Table 14). There appeared to be fewer pesticide tools in the market place.

Again the most widely used products were bespoke advisory tools, with 25 respondents scoring the products from 4.9 to 5.5 out of 6. The UK Pesticide Guide is an authoritative source of information and two free text comments suggested that there is a shift from such traditionally paper based sources to an online service.

The group was asked for their general opinion in free text of DSTs and this is shown in a word cloud in Figure 10.

UoL researchers presented information on the Environmental Yardstick for Pesticides to 120 agronomists and farmers at one BASIS alumni event and at one event organised by a group of independent agronomists for their farmers. The process comprised 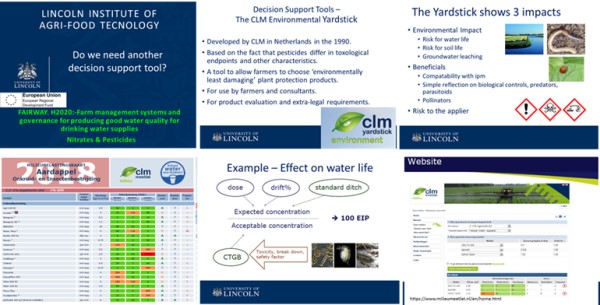 From the 120 survey forms passed out, 70 forms were returned. Not all respondents answered every question. Therefore the responses below are based on those who responded. Farmers and agronomists were analysed separately in case there were distinct differences. Then an aggregate for all responses including those who did not state whether they were agronomists of farmers, was analysed. Below are the key questions:

Question 1: Please could you rate how important it is for an agronomist to understand the impact of pesticides on water quality

Comment: Agronomists who responded showed a clear indication that understanding the impact of pesticides on water is very important. Farmers placed slightly less importance on their agronomists having this understanding.

Question 2: Please could you state how frequently you take into consideration the environmental impact of pesticides on water quality when making (pesticide) recommendations?

Question 3: Please could you scale how frequently you use the following information sources on the environmental impact of pesticides on water quality?

Comment: Most sources identified are positively considered. Taking a score of 5 and 6 as the most positive then agronomy software along with product label are frequently used as a source of information on environmental impact.

Question 4: For the information sources rates 3 and above in question 3, please rate them for user friendly format.

Comment: Taking categories 5 and 6 as positive, then it is interesting to note the poorer scores for both the product label and the Voluntary Initiative Environmental Information Sheets. Apart from the recommendation sheet, the label is the main source of information for the sprayer operator and was not valued as highly as other tools. The EIS sheets are a source of similar information (environmental risk, including to water) to Environmental Yardstick for Pesticides but in this survey they are deemed less user friendly than other sources of information. The EIS sheets are held in an online database and so may be hard to make ‘like for like’ comparisons.

Question 5: State the relevance of the information in influencing your decision on selecting active ingredients accounting for their environmental impact on water.

Comments: It is interesting to note that BASIS courses are perceived as most relevant along with product label. For the farmer, bespoke recommendation generated using the agronomy software and sent by the agronomist, is likely to include information on ideal weather conditions for spraying, label restrictions etc.

Question 10: Would you use the Environmental Yardstick as a standalone decision support tool to inform your decisions on pesticide recommendations if the data was made relevant to UK conditions and products?

Comments: Two thirds of respondents would consider using the Yardstick as a standalone. This is a curious response since it was clear from written feedback in the free text boxes provided in the survey that many farmers and agronomists would prefer a product that could be built into existing software products. It should be noted that a few of individuals, mainly famers spoke in person to express support for a tool that differentiates products based on environmental impacts and that this had not really occurred to them as a possible concept before.

Question 11: If you answered yes to Q10 please could you list the features which you consider useful?

Free text points that were appreciated and considered useful in the Yardstick, and a wish list of what could be included was as follows

Question 12: If you answered no to Q10 please explain your answer.

Free text reasons given for not wanting to use the Yardstick as a standalone tool included:

Comments: Many responses fell into two categories. Several respondents would want the tool to be incorporated into existing DSTs. Others feared that as a standalone product, using the ‘traffic light’ style colours in the DST, and making it appear that some products might be inferior to others; could cause stakeholders to further restrict an already depleted choice of actives without taking into account other factors such as efficacy, requirement for repeated applications etc.

Question 13: If the information provided by the Environmental Yardstick for Pesticides was incorporated into current DSTs, would this be more useful than a standalone tool to inform your pesticide recommendations with reference to their environmental risk on water quality?

Concluding comments on the advantages and disadvantages of the Environmental Yardstick for Pesticides are summarized in Table 15.

Table 15. Advantages and disadvantages of the Environmental Yardstick for Pesticides in an England context.

The information required to run the Environmental Yardstick for Pesticides could be found for England, although some of the IPM data might be difficult and it might not be possible for all crops. If this data was found and adaptations made it would face challenges in adoption for a number of reasons including:

If there was appetite to develop the tool for the UK then obvious organisations to discuss this with in addition to governmental organisations would be the bespoke software developers for products such as Gatekeeper and Muddy Boots, and the Voluntary initiative which hosts the Environmental Information Sheets on its website. This would help ensure that the tool complements or is integrated into existing information provision.