A comprehensive review and survey of Decision Support Tools (DSTs) currently in use in the FAIRWAY case studies is described in »Survey and review of existing decision support tools. Of the 36 DSTs  identified as most relevant, 12 were selected for further investigation to see if a tool developed in a particular national context could be used or provide inspiration elsewhere (»Evaluation of decision support tools). Here we describe the tool evaluated for potential use in the Baixo Mondego case study.

1. Selection of DST to evaluate in Baixo Mondego case study

The quality of water bodies in Portugal is not ideal. Some analysis in 2015 concluded that groundwater abstractions in Portugal are responsible for supplying 33% of the total volume of drinking water consumed, and many of the groundwater polluted water points found coincide with these public supply points. In 2016, about 25% of the groundwater in Portugal was classified as having a mediocre state. Concerning compliance with the environmental quality standards for pollutants defined in the context of water policy, 12% of the groundwater in Portugal has a mediocre state, with pollution from diffuse sources (agriculture) responsible for 11% of the cases. Nitrates and ammoniacal N from agriculture are one of the main causes of water pollution in Portugal, caused by excess nutrients added to the soils, especially since manure and wastewater sludge are increasingly being added to the soil as fertilizers. In 2017, 43 aquifer systems were analysed. 47% of them had monitoring points where the presence of ammoniacal N was detected. 84% of these had problems with nitrate pollution, exceeding the maximum allowable nitrate levels (50 mg / L). In fact, pesticides and fertilizers from agriculture drain to groundwater and rivers. This is a problem because, although 99% of the water that comes to the houses is controlled and has good quality (after treatment), efficiency problems remain. The percentage of unbilled water (illegal use, losses by breaks, as well as offers to entities or citizens without registration) is 30% of the total extracted, and this water is not treated for consumption purposes.

Between 2009 and 2016, the Baixo Mondego hydrographic region was the only one in Portugal in which the percentage of water bodies with mediocre state increased from 20% to 23% (»Baixo Mondego, PT case study). Baixo Mondego has a high percentage of agricultural land and therefore is an interesting area to study. There are two important areas to study within Baixo Mondego (Figure 34): a nitrate vulnerable zone where there is no downstream water extraction and an upstream water extraction site. In this context, our aim was to study the application of organic fertilizer in agriculture, the presence of nitrates and ammoniacal N in soil, and their losses to groundwater in Baixo Mondego. In Portugal there is a poor monitoring of pesticides in the water, and could be also an important issue to be tested with a DST. Although, farmers are quite controlled at this level, for example they need a certificate to buy and apply pesticides and this not happens with fertilizers. Furthermore, as studying two DSTs would be a very time consuming task, we decided to focus on nitrates. 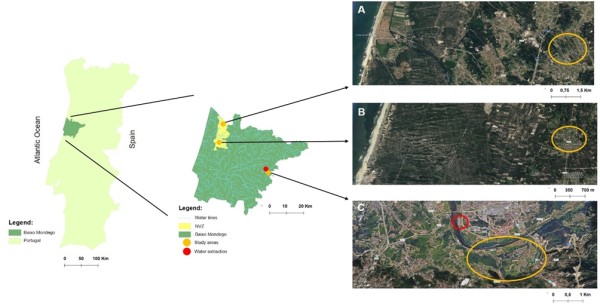 The choice of which DST to test in Baixo Mondego from the selected DST’s, considered some important issues. All DST’s with the following characteristics were excluded:

Portugal has a different climate (Mediterranean), characteristics in soil, temperature, precipitation etc. which limits the selection of DST. The PLANET nutrient management software was a good option as it is in line with our goals. However, it is a complex software for its end users, who are farmer’s advisors. Therefore, software integrated in PLANET was chosen to be tested, which is simpler and designed for farmers use. PLANET and MANNER-NPK were developed in the UK by ADAS and North Wyke Research, but are maintained and supported by ADAS. MANNER-NPK is a practical software tool that provides farmers with a quick estimate of crop available N (N), phosphate (P2O5) and potash (K2O) supply from organic manure applications. MANNER-NPK has drawn together the latest research information on factors affecting organic manure N availability to crops and N losses to the environment, via nitrate leaching, ammonia volatilisation and denitrification. Using this tool, it is possible to test the likely impact of changes to organic manure management practices, comparing two different situations and identifying which characteristics of the application lead to differences in the result. These results help farmers to improve the management of organic fertilizer applications, in order to reduce the amount of N and nitrate lost to the environment and to monetize the value of manure nutrients. The results can be used in crop nutrient management plans and when calculating the remaining balance of manufactured fertiliser to apply.

MANNER-NPK operation: The MANNER-NPK model is divided into three stages (Figure 35): farm details, specifically the address of the farm (A); field details, such as crop type, soil texture and whether or not the study area is located in a nitrate vulnerable zone (B); application details, such as the manure type, the application date and rate, the application method, the method of soil incorporation, the delay to soil incorporation, information about precipitation and wind, and the soil moisture (C).

After entering all the required information, the software creates a final report (Figure 36) with the estimated amount of each nutrient contained in the manure such as N, ammonium, uric acid, phosphate (P2O5), potash (K2O), etc. These quantities may change if the user enters their own manure analysis data rather than using default values. The total amount of N and other nutrients introduced into the soil are estimated according to the amount of manure applied. Regarding the N, the tool gives the amount that is mineralized, the amount lost by nitrate leaching, ammonia volatilization and denitrified, the crop available and the N use efficiency. Finally, it gives a breakdown of the potential financial value of all the organic manure applications, and for individual applications and nutrients. 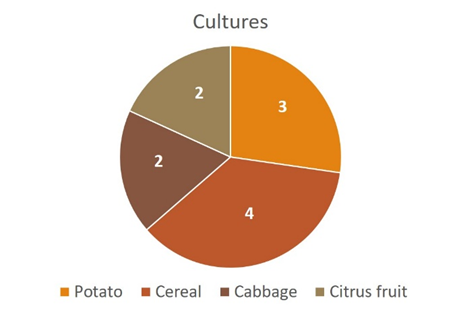 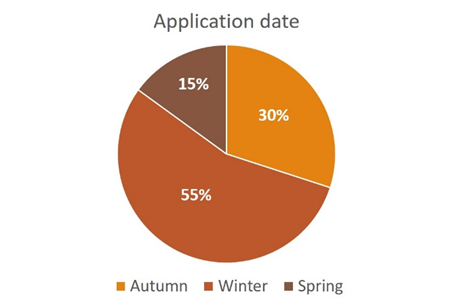 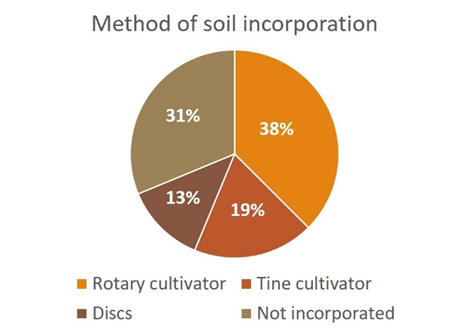 In crops, analysed in Baixo Mondego, only one manure application technique is used for all: broadcast spreader. Regarding soil incorporation of organic manures, it decreases ammonia emissions. This reduction depends on the method of soil incorporation, with the greatest reduction from incorporation methods with the greatest degree of mixing with the soil in the order: plough > rotary > disc > tine. Furthermore, in Baixo Mondego the delay to soil incorporation is mainly between 10-15 days after manure application. According to the software, the longer time delay to soil incorporation is associated with greater loss of ammonia, with 10-15 days considered a medium to long time. After manure application, rainfall only occurred in one case, although with very low amounts. According to the software, rainfall events soon after manure application have been shown to reduce ammonia emissions, as a result of manure being washed into the soil. Therefore, the lack of rainfall in the Baixo Mondego case contributed to increased ammonia emission. However, the wind was always very weak, which reduces the emission of ammonia by volatilization, according. Regarding the soil moisture content, we assumed that the soil was relatively dry at all the farms.

Results: In nitrate vulnerable zones in Portugal, the amount of organic fertilizers to be applied cannot exceed 170 kg/ha/year of N. The same rules should be followed for the remaining zones, but this is not mandatory as in nitrate vulnerable zones. Software estimates of the percentage of the farms analysed in Baixo Mondegothat obey the rule is shown in Figure 41 - Figure 42. 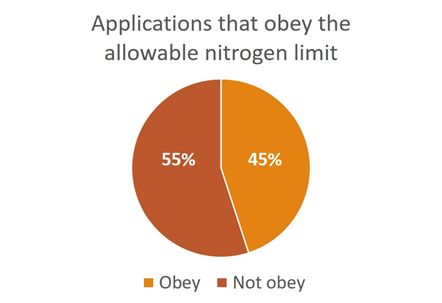 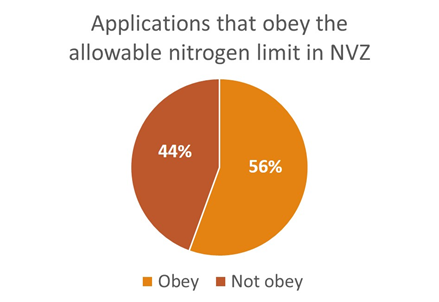 Regarding the percentage of N loss from each type of manure (Table 39), layer manure and broiler/turkey litter have the greatest losses. Green and food compost have the lowest losses.Table 40 shows that highest N losses are due to ammonia emission, followed by nitrate leaching and denitrification. The difference in N efficiency per crop is shown in Table 41. Highest N efficience is shown for cabbage and cereal ctops. The largest N use efficiency is shown for layer manure and with the broiler/turkey litter applications compared to other manure applications (Table 42). 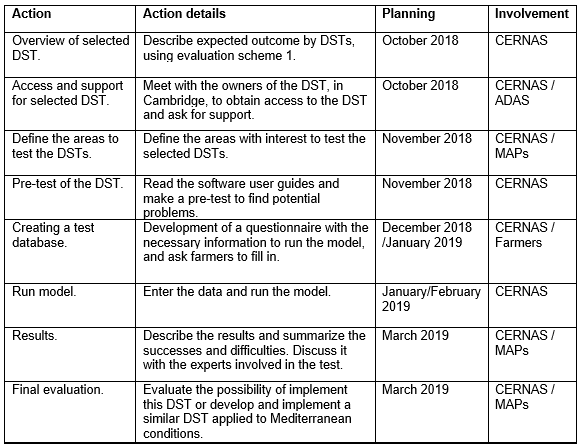 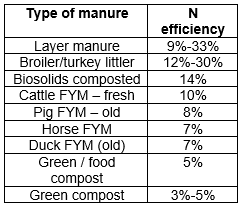 It is interesting to make a detailed analysis of results on a case-by-case basis, in order to obtain recommendations for an individual case. Small details (Table 39 - Table 42) can make the difference and, in practice, farmers are not aware of some of these facts. The main problems found with the results are the low efficiency of manures, the failures to obey the rules of nitrogen values present in the soil, and the improper management of manure application by farmers, since they do not know the dates or timing of applications. Apparently, about half of them do not obey the requirements for the amount of N applied to the soil with the manure. It is important to realize that there are factors to influence this, such as the type of manure applied, the date of application, the method of incorporation, etc. and they are usually not considered. This type of software and analysis are really important; if farmers make small changes they can reduce the losses of nitrogen. Small changes in the proper management of organic manure application can be a way to improve the quality of groundwater.

Table 43 presents some advantages and disadvantages of using MANNER-NPK.

Table 43. Advantages and disadvantages of MANNER-NPK seen in a Portuguese context.

The implementation of MANNER-NPK in Portugal would be difficult, since the software has some characteristics associated with UK conditions. Most of them are possible to overcome, but others can lead to inaccurate results. The needs in terms of functionality, use and access to MANNER-NPK were identified:

The obstacles for implementation of MANNER-NPK in Portugal are also identified:

In conclusion, MANNER-NPK would be a useful software tool for farmers to design their own fertilization plans without help, as the software is easy to access and use. There are guides and help available, and the people responsible for the DST were very helpful giving support and clarifying any doubts. This made the test easier. Although there is already an excel file in Portugal that calculates the nitrogen required to the crop, it calculates the amount of nitrogen to be applied to a particular crop, taking into account laboratory analyses of nitrogen supplied by soil, irrigation water and residues from previous crops. MANNER-NPK is more complete: it provides farmers with a quick estimate of crop applied and available N, as well as of P2O5 and K2O, considering several characteristics of the crop, soil, climatic conditions and fertilizer application, without the need for analysis laboratory tests. It also provides an estimate of N losses and N use efficiency. This can be a realistic estimate, if adapted to the characteristics of the study site. So, to implement the DST in Portugal it would need some adaptations. Ideally, software is developed in Portuguese language, considers the meteorological conditions in Portugal and a wide variety of vegetables. Once implemented in Portugal, it would be necessary to organize workshops to teach farmers how to use the software and explain the benefits they can derive from it. There may be older farmers who are not set with the use of computers, but all the other farmers would like to have an easy-to-use tool that allows them to have a lot of information in a simple way.

These results were presented in as a poster to the Congress Nactional das Escaolas Superiores Agrárias, on 14 and 15 November 2019