The Danish drinking water supply is entirely based on groundwater. The government’s official position is that drinking water should be based on good quality groundwater, which only needs simple treatment (e.g. aeration and filtration) before it is distributed to the consumers.

The Danish water supply structure is highly decentralized with approximately 2,600 public waterworks supplying ﬁve million inhabitants. The remaining approximately 0.4 million use water from approximately 70,000 private wells (Nature Agency 2012). Public water supply is the main source of drinking water, bottled water consumption being amongst the lowest in the EU and only one ﬁfth of the EU average (UNESDA 2014).

Approximately, 63% of the Danish land area is used for agriculture with intensive use of fertilizers, manure and pesticides. This can be a challenge to some water suppliers if they abstract groundwater from vulnerable, unprotected or shallow aquifers. This is especially the case for many private wells.

Numerous waterworks and wells have been closed because of nitrate pollution (Danish Economic Councils, 2015), and approximately 17% of the Danish area has been classified as nitrate vulnerable groundwater abstraction areas (Ministry of Environment and Food of Denmark, 2017).

Danish groundwater protection has a high priority and is carried out through 3 principal initiatives:

A project started in Tunø in 1986 was the first in Danish water supply history to successfully protect and restore groundwater against nitrate leaching. The project protected capture zones of the abstraction wells through comprehense and systematic monitoring to determine the effects on the groundwater quality.

2. The particular case of Tunø and its role in FAIRWAY

Tunø is a small island of 3.52 square kilometer in Aarhus Bay in the Kattegat Sea in the central part of Denmark. Agriculture is the mainstays of the island’s economy, and the main crops are vegetables with a high level of nitrate leaching. In addition, during the summer months, there is a considerable influx of tourist to the summer cottages and the marina.

The majority of the inhabitants and tourists are supplied with water from Tunø’s only waterworks. Water consumption is about 13,000 m3 y‾1 supplying approximately 100 consumers. The level of net precipitation on Tunø is low, in the range of 100 – 150 mm y-1.

Tunø Waterworks abstracts groundwater from the only water resource of significance on the island from 3 abstraction wells. The groundwater is abstracted from a depth of 15 - 20 meters below the ground from vulnerable shallow sandy Quaternary deposits with a short travel time. The only drinking water treatment is aeration and filtration. The aquifer is vulnerable to nitrate leaching from above and salt-water intrusion from below. 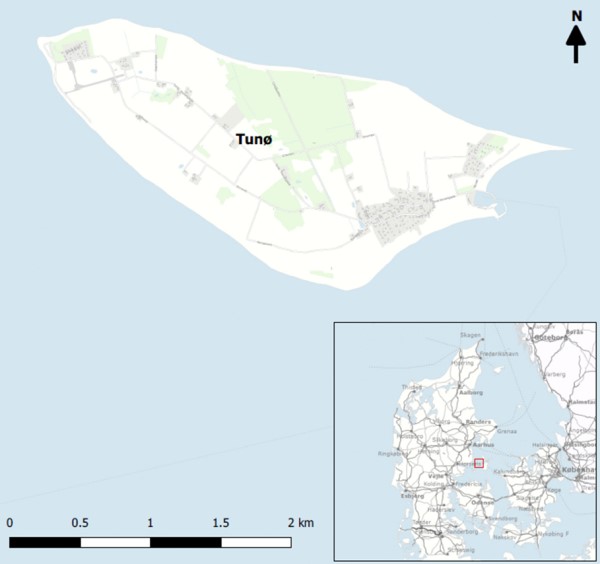 The Tunø case is a successful example of groundwater protection on a small island with one small waterworks where the aquifer is vulnerable to nitrate pollution and salt-water intrusion. The case will be used as a “lesson learned” and the following objectives has been identified with Tunø.

From the Tunø case, there are many qualitative and quantitative data available on agricultural practices, soil solution quality, hydrology, hydrogeology, groundwater and drinking water chemistry for an extensive period.

From 1989 to 1992 the initial protection zones were established, with 3 ha inner protection zone with permanent grass, and intensive agricultural advisory effort to improve nitrogen efficiency. From 1992 to 2017 a protection strategy was established with:

There was an ongoing process to identify the most cost-efficient measures. The extent of the inner zone initially was only 3 ha permanent grass, until it became clear that an extension was necessary in order to be most cost-efficient. Cooperation between authorities and agricultural specialists at SEGES in the MAP ensured the use of state of art methods.

The “new” groundwater formed under the permanent grassland close to the abstraction wells decreased to around 1 mg nitrate/l after just 1 year. After only 5 years, the pure groundwater front had penetrated down to the water table. After 10 years, several meters of the upper groundwater were completely free of nitrate. The nitrate concentration in the groundwater went from 150 mg/l (1987) to 25 mg/l in the aquifer the last 10 years.

The problem on Tunø is solved but the aquifer is still vulnerable to nitrate pollution and salt-water intrusion.

There is scope for these measures to be applied in other small islands, but also for groundwater protection in general. The following questions apply:

The present governing system is centralized with the Ministry of Environment and Food of Denmark, and related agencies making all decisions regarding use of agri-environmental measures, including quotas on fertilizer use, at farm level, and a demand for relatively high percentage with catch crops. The terms and conditions for the agriculture is highly determined based on EU policy, but national regulations are in place too.

A pesticide is only approved if it is proven that it will not leach from the root zone in a concentration above 0.1 microgram per liter. The approval is followed up by a pesticide alert system. There is a tax, which depends of the risk for e.g. leaching to the ground water. Farmers have to report records of their use of pesticides to a central database and they are fined if their use of pesticides do not comply with the regulation.

National Danish legislation aim to protect groundwater resources and surface waters from the effect of N loss to the environment, and Denmark has introduced several political action plans since 1985.

At the regional and local scale, the municipality is responsible for protecting groundwater used for drinking water purposes. This is conducted in close collaboration with the waterworks, individual farmer, agricultural advisors and the farmers’ association.

The municipality (Odder Kommune) is the authority responsible for the governance of Tunø Waterworks. The waterworks is maintained by a board, which has been developed during time and adjusted to inevitable changes in administration and ownership of agricultural fields in the protection zones over time.

The waterworks continuously monitor the groundwater and drinking water quality and follow the trend. If they see a continuous increase in e.g. nitrate or pesticides, they start to take action in close collaboration with the municipality. By legislation, the permit limit is defined. The farmer is responsible for management of his own fields. He takes his decisions partly based on information from different decision support tool and agricultural advisors. They are restricted in their choice of farming practice, use of fertilizers, manure and pesticides, measures etc. due to current legislation.

The water quality and farm management targets are at a national level set by national policy and legislation, which is based on EU policy, and recommendations from WHO. However, the local authority may differentiate targets within a vulnerable abstraction area. It might result in stricter targets in local areas closer to the abstraction wells.

The water quality targets are primarily based on the policy that drinking water in Denmark should be based on pure groundwater which only needs simple treatment with aeration, and filtration before it is distributed to the consumers. By legislation, different permit limits are defined for nitrate and pesticides among others. The farm management targets are a result of the above drinking water policy, but the targets are primarily part of a regulatory framework guiding/restricting the farming practices and use of fertilizers, manure and pesticides.

Water quality is regularly monitored and controlled by the water works. A whole range of water quality parameters and pesticides are monitored. The national legislation defines a minimum monitoring frequency. The municipality follows up. The government requires farmers to report in details on field plans for cropping systems and fertilizer use. If the nitrogen use exceed the quota, farmers are fined. In addition regularly monitoring was carried out from 1985 – 2007 in the root zone and observation wells (when the counties in Denmark were laid down). Currently, nobody is responsible for this additional monitoring, but the technical installations still exists, and can be brought into use if necessary.

By law, there is a background regulation of nitrate and pesticides. Implementation of additional measures must be sought by voluntary agreements. Enforcement is the last measure to be applied. A local groundwater action plan exists from the municipality. There have been no conflicts over water quality control.

There used to be a MAP in this area, but because the problem was solved, the MAP is no longer active. The MAP consisted of the local water works, two local farmers, the municipality, the local agricultural adviser, and the former county. In FAIRWAY, the development and structure of the former MAP over time will be analyzed. It will be considered if a new MAP should be established.