A comprehensive review and survey of Decision Support Tools (DSTs) currently in use in the FAIRWAY case studies is described in »Survey and review of existing decision support tools. Of the 36 DSTs  identified as most relevant, 12 were selected for further investigation to see if a tool developed in a particular national context could be used or provide inspiration elsewhere (»Evaluation of decision support tools). Here we describe the tool evaluated for potential use in the La Voulzie case study.

1. Selection of DST to evaluate in La Voulzie case study

The SIRIS tool was tested on the La Voulzie catchment about 70 km west of Paris (»La Voulzie, FR case study). The dominant crops grown are wheat followed by oilseed rape and barley. Wheat and barley are well spread throughout the catchment. To collect the input data, the BNV-d (Banque Nationale des Ventes des distributeurs) database was used. The BNV-d is supplied since 2009 with the declarations of the annual reports of the sales of phytosanitary products by the »authorized distributors.

SIRIS-Pesticides is a DST that allows classification of pesticides according to their potential to reach surface water and groundwater. SIRIS classifies pesticides from ideal to worst. The core system is a penalty grid. SIRIS-Pesticides helps to organize the monitoring of pesticides in waters at the regional or local scale. It is a software tool developed around a simple interface.

There are many DSTs in France which can perform diagnostics at a farm/field scale, but SIRIS is one of the few tools available for predicting pesticide loss at the catchment scale, but has not yet been tested in the La Voulzie catchment. It is therefore possible, from the results, to coordinate actions on several farms. The lack of mitigation measurement simulations is one of the main limitations for stakeholder use.

Parameters are grouped into classes. The class represents the importance of a process compared to the other. Two equivalent parameters are in the same class. Each parameter is affected to one “level” reflecting its contribution to exposure (Table 17).

The penalty grid assigns a score for each possible combination of parameters. The ideal substance has all its parameters at an “o” level and its score is 0. Penalties are attributed to substances that have parameters affected to levels different from “o”.

This grid lists the scores for every possible combinations of levels. Using the grid, the classes and the levels attributed to the parameters, it is possible to suggest which pesticides should be monitored in priority in freshwaters.

To collect the input data, the BNV-d database was used. The data specific to the catchment have not been gathered, the data for the department of Seine-et-Marne had to be used instead. In this web portal, the user can select when and where data are needed. A specific SIRIS export format is available. An average of the quantities provided over the period 2008-2017 has been used for this test. 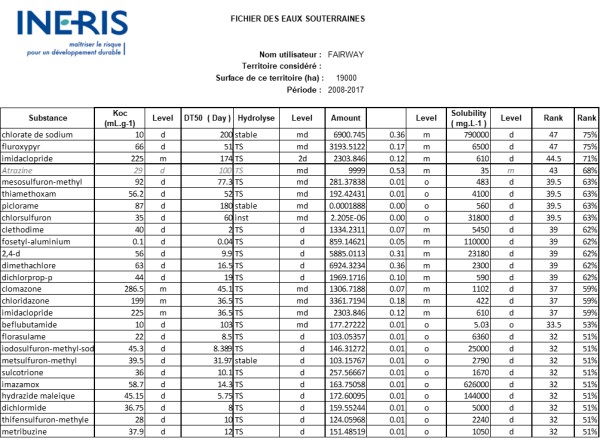 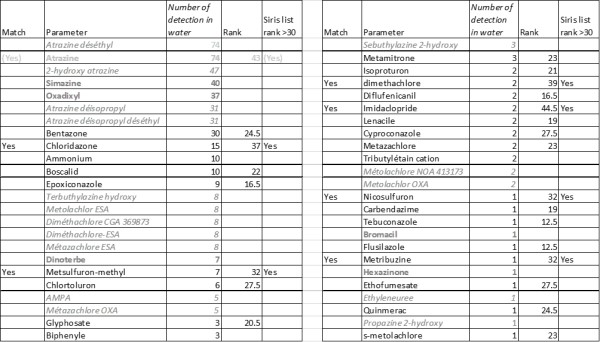 Table 18 shows results from SIRIS using the BNV-d input data. The table was adjusted from the original to make it easier to understand for this report. For instance, a level column for each parameter has been included to make the level explicit. Atrazine was added for comparison even though it is no longer sold. Only the top 25 substances with the highest scores are presented.

Table 19 shows all the pesticides detected at least once in spring water. For the FAIRWAY project, data from several springs were analysed. In this report, data from the Durthein spring are presented. The analyses analysis records for the La Voulzie springs are generally too short to be assessed. The first column shows the names of the products, the second column shows the number of detection instances between 2008 and 2017, and the last column indicates if the product has a rank above 30. Pesticides above rank 30, according to SIRIS, could reach the ground water. In the La Voulzie case study, 88 pesticides (out of 280) had a rank above 30.

A concordance between the concentrations actually observed and the results of the SIRIS tool are shown in Table 19. Explanations of the mismatch between the SIRIS forecasts and the measurements in groundwater include:

Table 20 summarizes the advantages and disadvantages of SIRIS used in a French context.

Table 20. Advantages and disadvantages of SIRIS seen in a French context.

SIRIS was easily applied on the catchment area using the data from the BNV-d. It can easily be applied on other basin watersheds in France. There are two opportunities to use it: a) by using the quantities actually applied or b) using pesticides doses (approved doses). This information is usually available (at least the approved doses).

SIRIS only allows classification of the products, and its minimal scale of operation is the watershed. The tool does not propose mitigation measures at the farm scale or across the basin watershed. Because of this, it may not be used for creating scenarios where practices are changed. The possibility to change the doses is not really usable because SIRIS react by threshold (e.g. parameter surface). It is possible to multiply or divide the dose by three and see no impact if one remains in the same level (Table 17), whereas a minimal change in the dose can have effects if it allows to pass a level ("o" towards "m" for example).

Basin watershed managers and water company managers could use SIRIS but it would be for farmers to access. For managers, it can help to select plans for monitoring, for animators; it can be used to know which products to reduce. By slightly modifying the original output template to make table appear clearer (o m d, see Table 17), it is easier to know why each product gets its ranking. Adding a column showing the threshold value will determine if the product will see its rating change with a small change of input data.