In contrast, the southeastern province of Lower Saxony (e.g. the provinces Braunschweig and Northeim, the so-calles "wheat belt") is  specialized in crop production. Soil conditions are diverse (sandy to clayey). Some farms make use of biogas residues, sewage sludge and compost; however, the area-based amount of organic fertilizers applied is generally at a low level.

In Germany, local water supply companies safeguard drinking water quality, consequently they have very high interest in meeting the legal regulations set by the German Ordinance on Potable Water (TrinkwV 2016). In the past, many attempts have been made to shape agricultural management in a way that drinking water resources are less affected.

In this context, the federal chamber of agriculture (Landwirtschaftskammer Niedersachsen), which is the public advisory authority for agricultural purposes, has initiated a program that aims at closing nutrient cycles on supra-regional scale. The joint project "Farm Manure Management" ("Verbundprojekt Wirtschaftsdüngermanagement") examines the (potential) export of farm manure from surplus regions to arable farming regions.

2. The particular case of Lower Saxony and its role in FAIRWAY

As it is also true for other federal states of Germany, groundwater is the dominant source of drinking water supply in the case study districts Süd-Oldenburg (northwest) and Braunschweig/Northeim (southeast).

Average annual precipitation ranges from 750 mm (northwest) to 650 mm (southeast). Depending on soil conditions (texture, humus content, land use, etc.), annual groundwater recharge varies between 100-300 mm in the northwest and 0-200 mm in the southeast. Average annual temperature is 9.5 °C for both provinces. 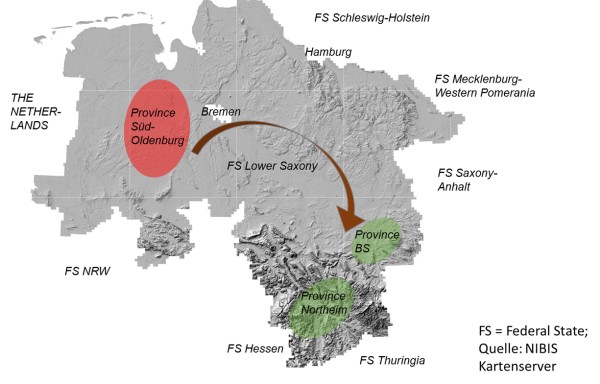 Hotspots of groundwater contamination are identified by different means:

The management objective in the case study is to reduce groundwater pollution in the northwestern districts by supra-regional transport of farm manure (Farm Manure Management project). In a first step, the potential volume of farm manure available to export is estimated. However, the imported farm manure should not result in an aggravated situation in the farm manure receiving districts (southeast). Therefore, the second step is the identification of factors, which further decrease this volume.

The project consists of three sub-projects.

Sub-project 1 focusses on the farm manure exporting farms in the northwest. Farmers in the northwest receive professional advice about how they can meet the legal requirements with the help of farm manure export. In this way pressure on the environment (nitrate, pesticides, residues of veterinary drugs, etc.) is relieved. Issues concerning animal feeding, farm manure processing, administrative constraints and costs are considered. Desirable effects are

Sub-project 2 focusses on the transport operation itself and ways to certify the quality of the individual substrates. The goal is to develop a compulsory quality management system with impartial certification and yearly monitoring. A crucial aspect is the reliable analysis of nutrient contents in the farm manure. Thus, methods for fast analysis of nutrients are examined (e.g. NIRS) and most feasible ones are identified. Furthermore, traceability of farm manure exports and standardized documentation (e.g. with the help of GPS and barcodes) is targeted.

When being carefully managed, the transport of farm manure can be a win-win business for exporting farms (release of pressure in the northwest) and importing farms (nutrients, soil fertility). Hence, it can contribute to help northwestern farms meeting the environmental standards. However, due to multifactorial reasons its impact is limited. Conceivably, the commercial processing of farm manure (resulting in single-nutrient fertilizers) can be a promising additional measure.

Sub-project 3 focusses on the farm manure receiving farms in the southeast. With the help of professional advice, it is carefully examined how farms can most efficiently make use of imported farm manure. Also factors other than economic considerations (so-called ‘soft factors’), limiting the willingness of farmers to import farm manure, are taken into account.

The following monitoring indicators are expected to be met:

Since professional advice concerning environmentally sound and water protecting farming has been carried out for decades in both in the northwestern and southeastern provinces by LWK (a partner organisation in FAIRWAY), problems could easily be addressed beforehand. However, the joint project Farm Manure Management implements measures on a supra-regional scale (which do not suffice on district-level only).

Measures to meet objectives in the northwest:

Measures to meet objectives in the southeast:

In the first year of project implementation, only a small number of farmers was interested to implement manure cooperations. Remaining challenges include:

At a national level, laws on agricultural management (especially fertilization) and water and nature conservation exist. The federal states have to translate national targets to their own laws and have to make sure that these are met. The ministries of agriculture (ML) and nature conservation (MU) of the federal state of Lower Saxony direct these tasks to specialized public institutions. For the case study, the relevant authorities are the chamber of agriculture (LWK), the authority for water coast and nature protection (NLWKN) and the authority for mining, energy and geology (LBEG). At a district scale, monitoring takes place by the local water authorities (Untere Wasserbehörden). Furthermore, water supply companies, which have to guarantee drinking water quality, are also major players. In the northwestern districts with high farm manure surplus, only one big water supply company operates (Oldenburgisch-Ostfriesischer Wasserverband (OOWV)). Since the OOWV is very much interested in releasing pressure on the water, they also participate financially in sub-project 2, which aims at facilitating the export of farm manure. In the southeastern districts, there is a smaller water supply company (LSW Netz GmbH & Co. KG) which target sustainable use of water resources. In terms of logistics, stakeholders involved are the regional farm machinery cooperative (Maschinenring), contractors and agri-trade and feed companies (GS Agri eG, Raiffeisenbank Emsland Mitte eG)). Farmers participate on a voluntary basis.

On federal state level ML and MU decide whether a program should be implemented. The available data they use for decision-making, is provided by public institutions for both water and nature protection and agriculture. For example, NLWKN  (here: Gewässerkundlicher Landesdienst) collects data on water pollution, LWK compiles long-term data on applied nutrients and LBEG runs a model which calculates the potential nitrate losses to the groundwater body. In addition, water supply companies lobby for feasible solutions in the districts they operate. The joint project Farm Manure Management is the result of a cooperation between the accountable authorities for agriculture and nature and water supply companies.

Water supply companies monitor water chemical parameters. The farm management advisors of LWK monitor management practices. Monitoring includes soil and plant measures (Nmin, nitrate concentration in the plant sap, etc.). In addition, there is some reasearch going on (suction cups on a research trial installed by LBEG) in order to better understand the relationship between farm management and nitrate emissions to the groundwater on a clayey soil.

The recently amended Fertilizer Ordinance (DüV 2017) puts pressure on many farms in the northwest. This certainly creates an incentive for the farms to participate in the project. However, participation generally takes place on a voluntary basis. Therefore itt has not been regarded necessary to make agreements about conflict resolution.

In districts where nitrate concentrations in the groundwater have stageated at high levels, so called „round-table discussions“ have been initiated (both in northwestern and southeastern districts). Participants are representatives of district authorities for water and agriculture,  local advisory services and in some districts also converned NGOs. A district representative of the farmers is the official promoter of the meeting. However, other farmers do not participate. Since the round-table discussions have only recently been initiated, more detailed information about concrete constraints and opportunities are expected in the near future.