A comprehensive review and survey of Decision Support Tools (DSTs) currently in use in the FAIRWAY case studies is described in »Survey and review of existing decision support tools. Of the 36 DSTs  identified as most relevant, 12 were selected for further investigation to see if a tool developed in a particular national context could be used or provide inspiration elsewhere (»Evaluation of decision support tools). Here we describe the tools evaluated for potential use in the Noord-Brabant case study.

1. Selection of DST to evaluate in the Noord Brabant case study

The FAIRWAY case study site at Noord Brabant is managed to reduce pesticide leaching to groundwater in the groundwater protection areas in the Noord Brabant province (»Noord-Brabant, NL case study). An important tool to reduce leaching is the Environmental Yardstick for pesticides. This tool shows farmers and advisors the environmental impact of all permitted pesticides on specific receptors, including ground water. Farmers can take this information into account when choosing pesticides, and can compare the environmental impact between crops, farms and region. The Danish tool Plant Protection Online also holds information on this topic, which is why the tool was tested in the North Brabant case study.

In the Netherlands, farmers are only allowed to use pesticides approved by the Dutch Board for the Authorization of Plant Protection Products and Biocides (CTGB). Based on information provided by the pesticide producers and models, the CTGB determines the risk of leaching to groundwater (amongst other environmental effects specified in the European Uniform Principles). In the following section, the pesticide advice for relevant crops was tested with the Danish tool Plant Protection Online. The results were discussed with field experts and compared to the Dutch Environmental Yardstick and the advice given in the case study site at North Brabant.

Plant Protection Online is a website with a number of tools, divided into weeds, pests and diseases. Some of the tools are available for all three, but most are only available for weeds. The most interesting tools for the North Brabant case were the following:

Problem solvers: The problem solvers are tools to determine possible pesticide mixtures, calculating their costs and pesticide (environmental) load. Pesticide mixtures are determined based on the crop species and weed, pest or disease species, taking into account the level of infection. The problem solver for weeds in the tool is by far the most extensive, with a good number of crops and weed species to choose from. To obtain results, the user must fill in the expected yield and growth stage of the crop, as well as the specific weed species and their growth stage and density (Figure 30). From this, the tool automatically calculates the ‘need’, or damage threshold. 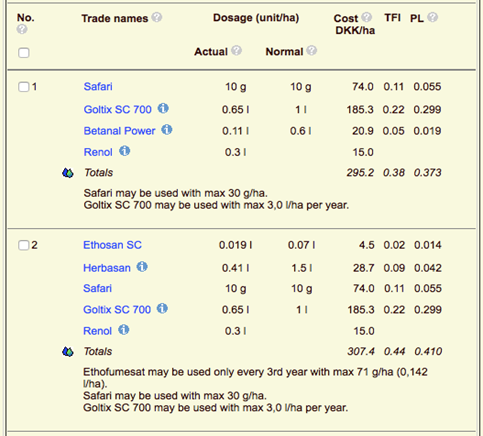 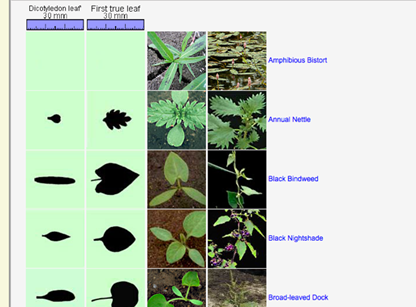 By filling in the conditions, the user obtains a field report (Figure 31). This report shows the possible mixes of pesticides and their dosage, to achieve the desired weed suppression, or ‘need’. An interesting feature is the PL, or pesticide load. This value indicates the impact the pesticide with the specified dosage has on the environment. Also the costs per ha are interesting when choosing a specific mixture. The problem solvers for pests and diseases provide a limited number of grain crops and a very limited amount of pests/diseases.

Identification keys: The identification keys consist of lists of weeds, pests and diseases which can be found in a specific crop. They provide schematic drawings of the cotyledons and the first true leaves, as well as pictures of early and more developed growth stages (Figure 32). When selecting a specific weed, the tool shows additional information, depending on the relevance of the species. Also for this tool, the information on weeds is extensive, but very limited for pests and diseases.

Problem solvers: To test the use of problem solvers for the reduction of leaching to the groundwater, several scenarios were tested with different crops and levels of crop and weed emergence. What is interesting is that potatoes, one of the most important crops grown in the Netherlands, are not part of the tools. Other popular crops like sugar beet, maize and wheat are available. The field reports produced by the problem solvers were compared to advice issued in the North Brabant case study. The Plant Protection Online results were almost always lower than maximum dose. This was expected for the lower density (2-10 plants per m2), but not for the higher densities (41-150 plants per m2). It did however depend on the weed species, as for some weeds (near) maximum dosage is given, independent of density.

The integration of the damage thresholds and lower dosages are very interesting for the groundwater perspective. It may be a useful tool for an advisor, especially when in doubt if treatment is necessary and also whether a lower dosage is sufficient (lower dosage means less leaching to groundwater).

Plant Protection Online was also tested by advisors who work with the farmers in the North Brabant case study. They all agreed that the tool was not useful for farmers, as it takes too much time and assumes skills in identifying species and levels of weeds. In Denmark, the tool is also mostly used by advisors. They did like the information and advice on lower dosages, specifically for projects like the North Brabant case study. There are similar tools available in the Netherlands (e.g. the Delphy mobile app) that help farmers to identify weeds and determine necessary pesticide applications. These tools, however, do not currently give damage thresholds or reduced dosages.

The problem solver for diseases was not met with enthusiasm, as lower dosages are risky in terms of resistance development. It made the advisors unsure about the reliability of the data. A more detailed explanation of the input underlying the models could be useful in convincing the advisors.

Table 35. Positive (advantages) and negative (disadvantages) features of the problem solvers for weeds, pests and diseases of the Plant Protection Online system.

Also, the key is very limited in terms of diseases and pests.

User’s mixture: The user’s mixture tool is very useful when there is doubt over whether a certain mixture will be enough, or whether all components (active ingredients) are necessary. It could also be useful for advisors when preparing mixtures. Most advice was not testable as a number of pesticides allowed in the Netherlands are not allowed in Denmark. This is especially true for maize, where none of the advised products were available.

For sugar beet, there were more products available, although, no complete advice could be tested. Instead of Betanal + Goltix + Gardo Gold, we tested the first two, with and without Safari. The advised mixture of 0.5 l/ha of Betanal and 0.5 kg/ha of Goltix is not sufficient against most weeds at 2-3 leaves, independent of density and weed growth stage (Figure 33).

In this case, Safari is almost never a useful addition, as it only adds a few percentage points to the efficacy. 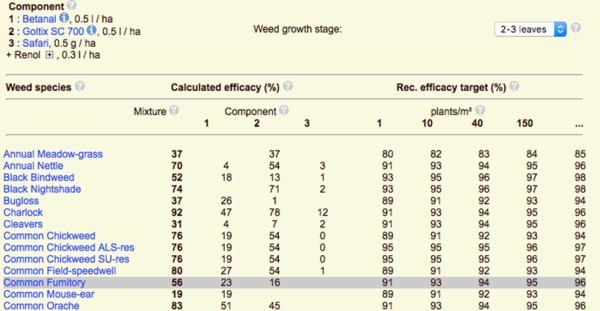 Plant Protection Online, in its current form, would be difficult to implement in the Netherlands. The tool was not developed for Dutch crops and pesticides. It assumes that farmers know the specific weeds and their densities and growth stages, but does not give a tool to fill out this information while in the field. The tools could however be useful for advisors, especially when determining damage thresholds and reduced dosages.

An important disadvantage is that tools for pests and diseases do not account for a sufficient number of crops and pests/diseases. Also, the dosages advised for diseases are very low, while in the Netherlands there is a concern that low dosages may speed up fungal resistance development. The low dosages were advised by researchers of the University and based on experimental results. If the experiments were short-term, this may explain the advice for low dosages, as resistance takes time to develop.

To be implemented on a large scale, the information provided by the tool should be incorporated into existing tools. Dutch farmers often rely on mobile apps, accessing the information when needed, preferably in the field. Incorporating the interesting features of Plant Protection Online into existing apps would be preferable to creating a new tool.

For full references to papers quoted in this article see »References