There is a wide variation in the number and sophistication of the DSTs available in the different participant countries, reflecting the degree of investment and funding provided. In some countries such as Denmark, a number of different computer-based and online DSTs have been developed aimed at both farmers/advisors (e.g. Mark Online, Plant Protection Online, Dyrkningsvejledninger) and water quality managers (e.g. CTzoom/CTtools, BEST portal, TargetEconN). In contrast, the only DSTs available in Portugal are paper-based manuals and guidelines such as the ‘Manual de Fertilização das Culturas’ and ‘Utilização de produtos fitofarmaceuticos na agricultura’ (although some of these are also available online).

The DSTs aimed at farmers and advisors are rarely used in more than one country because often such a DST and supporting information are only available in the local language. The reason for this limitation is that many DSTs have been developed to meet the specific needs and requirements of a particular country or part of a country, and also they may be tailored to fit the local legislature or agro-climatic conditions. For instance, the German Düngeplanung bespoke software tool was developed in Lower Saxony to help farmers and advisors identify the amount of fertiliser which should be applied based on the local legal framework and economic circumstances; it is only available in German. An exception to this is the Dutch Environmental Yardstick for Pesticides (Reus & Leendertse, 2000), which is used in both the Netherlands and Belgium, and is currently being tested with data from US farms; the tool and supporting documentation is available in English. In addition, Plant Protection Online which was developed in Denmark is being used in the Baltics and Poland, with user information available in Danish, English and German.

In the absence of other tools capable of modelling agri-environmental measures, Slovenia employs the OECD-EUROSTAT N Balance Analysis methodology to calculate nitrogen (and phophate) balances. Joint Eurostat/OECD meetings identify and agree on the most robust and feasible methodology for the balance calculations. A handbook sets out the main principles of the methodology across OECD and EU Member countries in order to consistently produce an indicator based on a single methodology and harmonised definitions. In line with other EU member states, this paper-based tool serves as basis for reporting Nitrate Directive implementation to the EU, and for the preparation of national policy/legislation and recommendations for farmers on measures for drinking water protection. Slovenia also use the regional water balance model GROWA-SI for reporting Nitrate Directive implementation at a country wide level. This model was developed in Germany for the Slovenian Environmental Agency, and can calculate groundwater recharge rates and account for N balances (Andelov et al., 2014; Tetzlaff et al., 2015).

Some of the more scientifically focussed DSTs are also used internationally, with the results published in the scientific literature. For example, the SCIMAP model developed in the UK has been used in Indonesia to target reforestation to reduce diffuse pollution risks (Curry, 2016). On a worldwide scale, the Soil and Water Assessment Tool (SWAT) which was initially developed in the US has been widely used to model the impacts of agricultural management on water quality (e.g. Azzellini et al., 2015; Cau & Paniconi, 2007; Taylor et al., 2016; Pisinarus et al., 2010). Indeed, there is a SWAT literature database containing thousands of papers and a number of review articles relating to the SWAT model (https://swat.tamu.edu/ ).

Numbers and types of users

For many of the shortlisted DSTs, no details were provided on numbers of users, because the participants did not have access to the information. However, Figure 1 shows the numbers of users of the DSTs for which data was available. 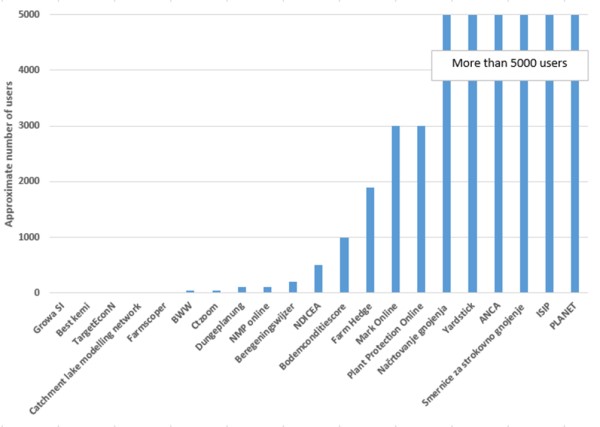 In some countries farmers are obliged under regulations or commercial pressures to use DSTs, and this will clearly affect take-up and user numbers. For example, dairy farmers in the Netherlands who provide milk to Friesland Campina have to use ANCA (Annual Nutrient Cycling Assessment) to analyse nutrient flows and emissions from dairy farms hence indirectly improving water quality; there are currently c.16,000 users. In the UK, farmers in Nitrate Vulnerable Zones (NVZs) can use a DST such as PLANET (Gibbons et al., 2005) to demonstrate compliance with NVZ rules and it is widely used for this purpose. The Düngeplanung DST developed in Lower Saxony (DE) is becoming more widely used (currently 50-100 users) following recent changes to regulations which require farmers to produce a fertiliser plan and nutrient balances.

In constrast, the number of users is often small for specialised DSTs such as the Norwegian Catchment Lake Modelling Network, which comprises a series of process-based, mass-balance models for phosphorus and is designed primarily as a catchment management tool rather than for general use (Couture et al., 2014).

Barriers to the uptake of decision support tools

Although some DSTs are available for farmers that cover both nutrients and pesticides (and other aspects of farm management), some may opt to use more than one DST (or none) depending on their particular needs and requirements, and the legislative and economic environment in which they are operating. DSTs often deal with complex issues, so it is not always easy for farmers to understand and use them – using multiple tools in different types does not always lead to a better decision, as it can be difficult to decide which tools to use under which circumstances.

A recent project undertaken in the UK (Defra, 2015) looked in detail at farmers’ usage of the fertiliser recommendations for grassland published in one of the key UK paper-based decision support tools (The Fertiliser Manual (RB209); Defra, 2010). The majority of respondents did not use the The Fertiliser Manual (RB209), although they described it as ‘adequate’ as a reference guide. Drawing on information from in-depth interviews and focus groups, the study found that users:

Another UK study reviewed tools for decision making in agriculture and found that despite their availability in a wide range of formats, uptake in the UK and many other countries has been low (Rose et al., 2016). Using a combination of qualitative interviews and quantitative surveys, the authors identified fifteen factors that are influential in convincing farmers and advisers to use DSTs, including:

The authors concluded that a better understanding of these factors should lead to more effective DST design and delivery in the future. These authors followed up this work with a study on how stakeholders could be more effectively involved to improve DST design (Rose et al., 2018). DST use was explored in a series of 78 interviews and 5 focus groups. Their main suggestion was to assess the ‘decision support context’ before building a product. Other requirements were better knowledge of user-centred desgin practices, a clear understanding of advice systems and greater collaboration with humam-computer interaction researchers.

DSTs aimed at policy makers, water quality managers or catchment managers tend to be more complex and require more data. However, the drivers for using such tools are often legislative or policy focussed; thus, potential users of a particular DST should be provided with an appropriate level of training and have access to the relevant datasets in order to do so.