In order to further drive forward the proiritisation of the selected ADWIs, we intend to connect ADWIs from the agricultural and the water work side, using statistical methods.

We also intend to further investigate on the Link indicator, especially how this ADWI fits in between the other indicators. We intend to examine

For this purpose, a database of ADWI-data on catchment level will be collected from the FAIRWAY-case studies. Preparatory work has been carried out, in order to specify the data request to the case studies. In ththis article, trial calculations being conducted with a small database are further explained.

French Ministry of Agriculture (RGA: General agricultural survey) provides, for each municipality, the Utilized Agricultural Area (UAA) and the distribution of this area between crops (ex: wheat, maize, rapeseed). These data come from farm surveys achieved in 1970, 1979, 1988, 2000 and 2010. A time step transformation (interpolation) has been carried out to obtain yearly data, for each major crop (fallow, meadow, sunflower, peas, maize, oilseed rape, sugarbeet, spring barley, winter wheat). These data were integrated in the draft database and now graphs can be plotted to illustrate evolutions over time.

It should be highlighted that over the studied period, cereals are most important in terms of proportion of land use.

In this method, data of different scales are used (and combined/homogenised in the tool itself):

Providing the spatial delimitation of the studied catchment (shapefile format), calculations are performed and expressed in relation to this catchment leading to the following outputs: 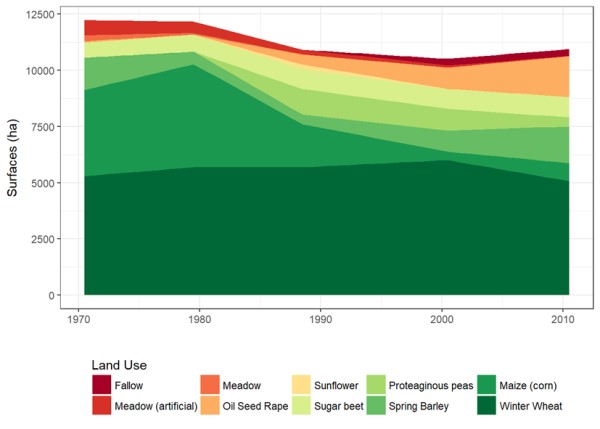 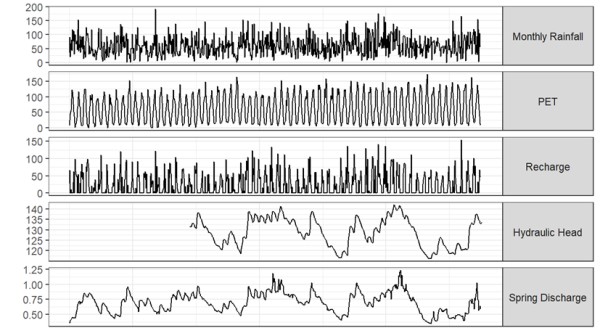 In addition, a N soil surface budget calculation is performed using a N budget = [mineral fertilisation + organic fertilisation + fixation + atmospheric deposition]- [Output (plant N consumption)]. Plant N consumption included grazing (grass N comsuption) but there very little animal production in this catchment. All these data were then released at annual time steps and integrated to the draft database. This budget is refered as a surplus in Cassis-N method.

Most of the hydrologic data were collected by Eau de Paris at the “La Voulzie” spring and are transmitted to the BRGM. The hydraulic head is measured at the BRGM piezometer located in the city of Bauchery Saint-Martin (6 km, north-east). All these data are available at irregular time steps varying from daily to monthly. Bulk data were integrated to the draft database and a homogenisation of the time steps was performed.

The concentrations of nitrate were collected by Eau de Paris at the “La Voulzie” spring and were transmitted to the BRGM. All major chemical compounds are analysed, but nitrate only will be used in the present project. Nitrate time series starts in the 50’s with a concentration close to 20 mg/L and exhibit a nearly continuous rise up to the year 2000. After that date nitrate concentrations seems to be more stable. Reasons of stabilisation could be found in climatic driving forces (more humid period for example), but part of the stabilisation could also be due to the implementation of action plans at the national (nitrates directives) and local (Fertimieux) level.

In order to find a link between pressure and state indicators it is intended to investigate relations that exist between nitrogen input on a study site and the observed effect on water quality. When needed, information on the hydrogeological/hydrological functioning is shown.

For that reason, statistical links between indicators that were integrated in the draft database were computed and tested.

Pre-processing of the available data had been carried out, mainly in order to homogenise time steps for all data. In a general manner, main processing consists in scaling down data to annual values by averaging or summing data. Annual data are attributed to the first July of the running year.

Impact of recharge on spring discharge

At a yearly scale, linkage between recharge and spring discharge can be evaluated using a cross correlation function (ccf). The intensity of the correlation returned by ccf(x, y) varies between 0 and 1, and being 1 at best. For a range of lag (k) the correlation is calculated between x[t+k] and y[t] and then plotted on a bar chart. Each bar on the chart is then separated from another by 12 months (i. e. one year).

From this analysis, it can be seen that the best correlation is found for a lag k= -12 months, which means, that the spring discharge time series can be rather well explained by the evolution of the recharge of the year before. This analysis is of importance, since nitrate is measured in water from a spring, whereas nitrogen inputs are measured at the soil/root zone. Transfers from the soil/root zone to water should then be described in simple terms. 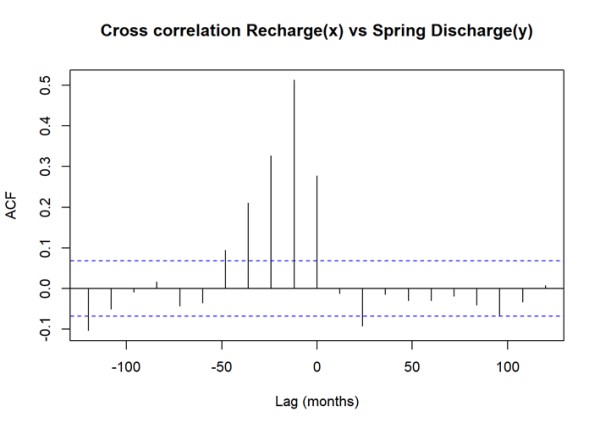 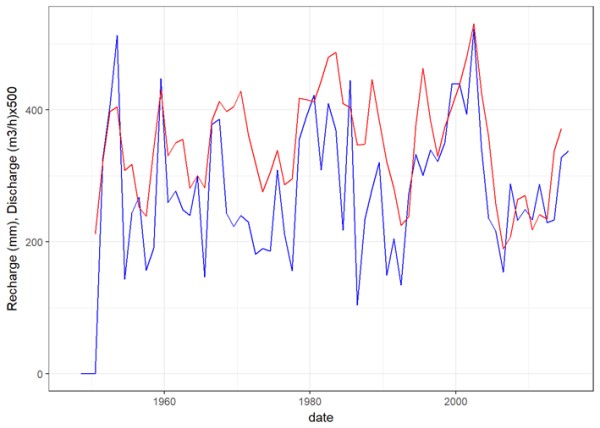 Using information coming from the cross correlation analysis, recharge shifted by 12 months and discharge are plotted on the same graph. It highlights the similarity of the time evolution. One should remark that main evolutions are similar, but small variations (peaks mainly) diverge in some cases.

Exploring the link between recharge and NO3-

Annual variation in nitrate concentration could be due to variations of the flow regime. As discharge flow rate is mainly governed by recharge rate, the relation between recharge and nitrate concentration could be directly investigated. Using the same cross correlation method as before, best correlation between annual recharge and nitrate concentration is found at lag k= - 36 months (correlation is the highest when evaluated between y[t] and x[t-36]), which correspond to 3 years. In that case, the relation is weak (CCF=0.20 at best) in comparison of the previous case. The trends in the nitrate time series is one of the more evident explanation. 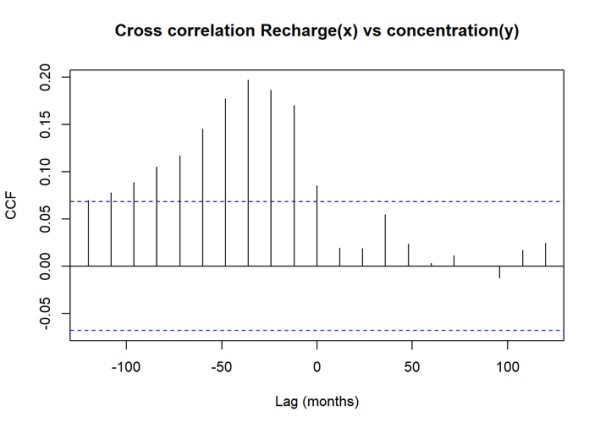 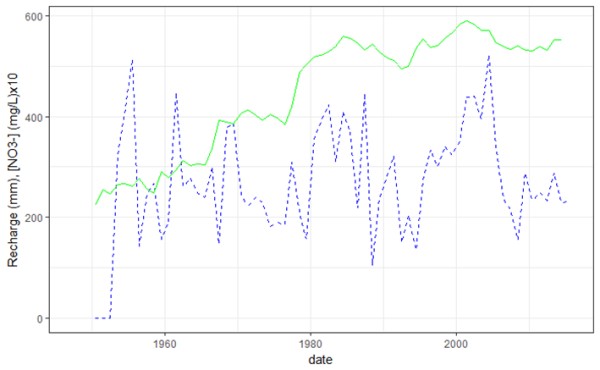 Further tests showed, that the two time series do not have the same cyclicalities. Discharge has an annual cyclicality (12 months), while the time series of concentrations has a cyclicality of 8 years. Recharge (blue dashed line) shifted by 3 years and annual mean nitrate concentration. Due to the increasing trend in nitrates, similarity between the curves is not as good as for the recharge/discharge approach.

Linkage between Cassis-N surplus and NO3- concentration

Cassis-N calculates the nitrogen surplus and therefore is similar to the GNB, but does not follow exactly the calculations intended by OECD rules (OECD 2007) as, for instance, volatile N-losses from manure are not considered. This indicator could be considered as representative for the amount of nitrates actually inflowing in the aquifer. So, a relationship between the nitrogen budget and the nitrate concentration is expected. Using a similar approach, the best correlation between nitrogen budget and nitrate concentration was searched for.

The best correlation was found at lag k= -12 months, which means, that the strongest correlation between x (GNB) and y (NO3) is found for x[t-12] and y[t]. This signifies, that nitrogen surplus data of the year before (12 months before) are the most appropriate to explain a linkage between nitrogen surplus and NO3--concentration. Nevertheless, the correlation is relatively weak (but significant). 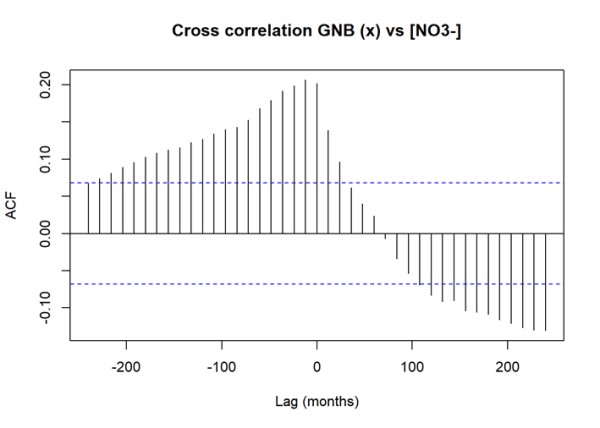 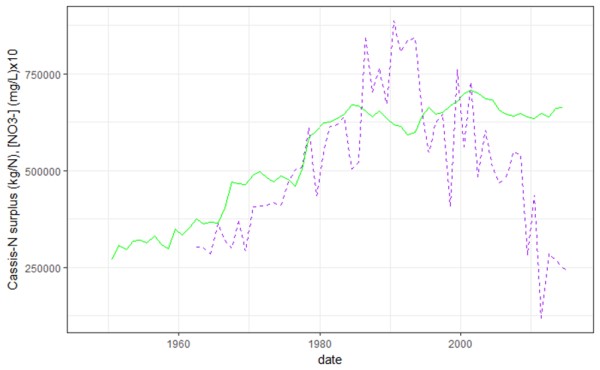 Plotting the two time series on the same graph highlights the rather poor correlation between this two time series. The increasing trend of the NO3-, whereas the Cassis-N surplus is decreasing starting from 1990, can explain this lack of strong relationship. On the following plot, NO3- - concentrations are in green (shifted by 12 months) and the Cassis-N surplus is plotted in purple (dashed lines).

Linkage between mineral fertilisation and NO3- concentration

Since mineral fertilisation is a much more direct indicator than the surplus, it represents a much simplier opportunity to test the input/output link into the system.

In that case, the correlation is much better (0.8) and represents a rather good explanation of the variation of nitrate concentration. A disturbing result is the absence of lag for the peak of correlation. Nevertheless, giving the objectives of this first approach, one can invoke several processes than can affect the statistical analysis and explain the results. Investigating these processes remains out of the scope of this study. 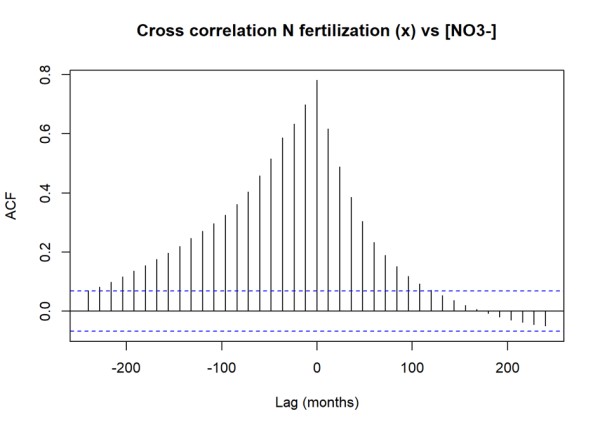 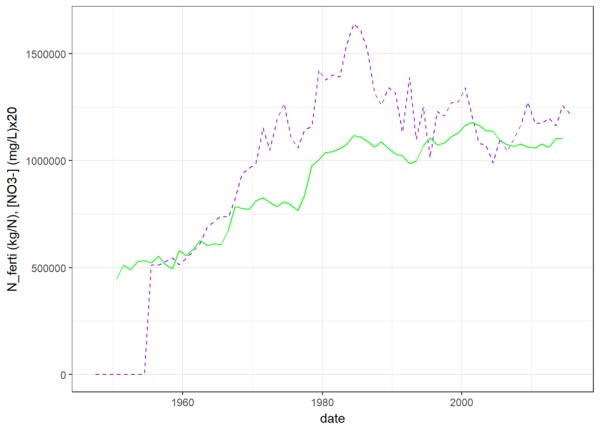 4. Future on work on indicators and database

The first attempt to build this database enabled the first calculations of indicators as well as the first links between pressure indicators and state indicators. These links have shown that the most integrated and aggregated indicators (GNB or Cassis-N surplus) are not the ones that yield the best results. Thus, the study of the cross-correlation between N-surplus and concentration of nitrates in the spring water does not show the best results. Additional data could be integrated to better account for water and solute transfers in the unsaturated zone, but there is a risk of obtaining a too complex indicator or a too complex model to explain links between indicators. The integration of many explanatory factors in order to obtain a model has been realised by the BRGM on the source of the Voulzy, this type of work deviates from the will to simplify the FAIRWAY project.

The first tests were carried out with the French case study data. It shows that diversity of time steps are important to take into account. An appropriate approach could be developed. Integration of other case studies data is a work to achieve in order to deliver a final and definitive database by the end of the project.

Again, the topic “data availability respectively accessibility” will be of relevance. Linking data and developing algorihms will bring us to questions on :

The most effective data according to the simulations on cathment level should be further tested in the case studies on relevant target groups, in order to identiy the most feasible indicators.

In the meantime, other indicators will be calculated and compared with each other in order to eventually link the pressure indicators and the state indicators.

5. Main insight of the approach

First attempts to integrate case studies data in a rather simple database and to explore link between this indicators shows that:

Evaluation of the indicators

After meaningful indicators have been identified, they need to be further evaluated. Evaluation of indicators can be effectuated by different methods (Bockstaller et al., 2008).

Evaluation of the quality of the indicator: Bockstaller et al. (2008) report, that the classical approach for evaluating the accuracy of a model prediction is to compare calculated and measured data. However, this approach may be difficult to apply to simplified indicators Rigby et al., 2001, Reus et al., 2002) and propose a three-step methodological framework for the evaluation of environmental indicators.

Evaluation of the indicator design: This evaluation could be effectuated by an expert panel, alternatively, a peer-reviewed article is suitable. Aim is to identify need of improvement.

Evaluation by end-users: A consistent and comprehensive set of indicators is userful for the correct interpretation of complex systems. Taking into account the interactions of indicators enables the investigator to map appropriately the main structure and processes of the system (Binder et al., 2010).

With a selection process based on the concept of a causal network, interactions between environmental themes and indicators can be taken into account. To assess the environmental impact of nitrogen fertilisation on surface water ecosystems, selection is made by considering a network composed of causal chains related to crop production, socioeconomic issues, air, soil, and water (Niemeijer and de Groot 2008).

The identification of correlations between indicators is recommended in the process of selecting a minimal, consistent, and sufficient set of indicators. By way of illustration, Thomassen and de Boer (2005) showed for dairy farms in the Netherlands, that there was a correlation between nitrogen surplus and eutrophication potential onfarm. This means, that the nitrogen surplus is relevant “to a moderate extent” to assess the environmental impact of eutrophication with more easily available data.

Evaluation by end-users: The purpose of this last step is to evaluate the acceptance of the end-users for the new indicator. The develover can at this stage collect feed back, especially suggestions for improvements.