Agri-drinking water indicators (ADWIs) are intended to assist agricultural consultancy, therefore, they should be appealing and understandable for farmers. On a larger scale, ADWIs are intended to support central and local administration and policymakers, water companies in analysing the situation of diffuse pollution and selecting measures to protect drinking water resources.

The ADWIs are defined within the DPSIR-framework. The DPSIR is one of the most widely used conceptual framework to explain the cause and effect relationships between the society and environment (Smeets and Weterings 1999). The DPSIR describes the feedbacks among social and economic developments including: driving forces (D), pressures (P) on the environment, the state (S) of the environment changes, impacts (I) on ecosystems, and human health and society and a societal response (R) (Smeets and Weterings 1999).

However, under the DPSIR framework there is no component to explain the relationships between pressure and state that may be highly variable from site to site. Therefore, FAIRWAY has developed a new component called ‘link’ to the DPSIR framework to better explain the relationships between pressure and state. The new framework is then called DPLSIR (Figure 1). The link component between agricultural pressure and drinking water quality state can be assessed by the key indicator called lag time. Lag time is defined as the time between leaching of nitrate from the agricultural system and the appearance of nitrate in the hydrogeological system in groundwater or surface water used for drinking water production (Kim et al 2020). 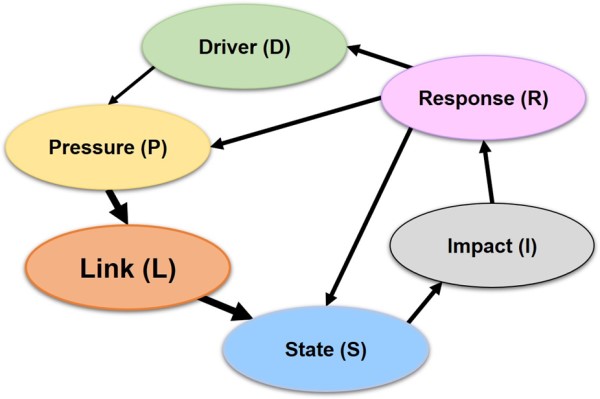 An initial survey of and data collection from the 13 FAIRWAY case studies showed large heterogeneity in the available data, and limitations in possibilities for comparison studies (Klages et al., 2018). This was either due to lacking pressure data, limited availability of impact, state and link indicators data, or due to different scales of data (plot, farm, regional or larger) (see »Agri-drinking water quality indicators and IT/sensor techniques).

Another limiting factor for availability of data was related to protection of personal data enforced by the EU's General Data Protection Regulation (GDPR) (May 2019). In some case studies, the GDPR made it especially difficult and complicated to get access to farm data relating to driving force and pressure AWDIs.

FAIRWAY aims at developing a set of “…quick and direct indicators...which allow farmers to be actors in the environmental impact at farm level.”. To fullfill this objective, the first stage of the data collection was to gather ‘farm level’ data or the most detailed data as possible. The criteria for the data collections were:

Farm level data for driving force and pressure indicators that was required for analysis could be collected only in three case study sites: »Island Tunø and »Aalborg in Denmark and »La Voulzie in France. However, these 3 case studies cover a relative wide range of situations in Europe as the sites vary regarding climate, abstraction volume, size of protected area, farming type, geology, and flow pathways.

In »Agri-drinking water quality indicators and IT/sensor techniques we present an overview of the most promising ADWIs from a survey of all FAIRWAY case studies. The ADWIs were selected by

It was deduced that the indicators from the agricultural sector acting as Driving forces and as Pressure indicators were far more numerous than State and Impact indicators from the water sector. The large number of agricultural Driving forces and Pressure ADWIs (land use, climatic conditions, soil properties, farming types, farm management, N-fertilization, pesticide application etc.) also explained that from this part of the DPSLIR-model many factors may influence water quality. On the other hand, water-quality State indicators are far more standardised for monitoring.

The choice of nitrogen indicators is presented in the published article »Kim et al (2020) Lag Time as an Indicator of the Link between Agricultural Pressure and Drinking Water Quality State, and summarized in Table 1.

N surplus is chosen as the pressure indicator, lag time as the link indicator and annual average concentrations of nitrate in soil pore water below the root zone, groundwater, or steam water as the state indicator.

Unlike nitrogen, time-series of the pesticide inputs were not available. Thus, we hypothesized that the N-fertilizer usage, and the area of main crop type may positively correlate to pesticide usage. Therefore, we evaluated the applicability of the following indirect indicators as a pesticides pressure indicator:

A statistical method was used to connect or link the ADWIs from the agricultural and water sector by calculating a lag time. The calculated lag time is compared to direct measurement of water ages with dating methods in the two case studies in Denmark with available data. 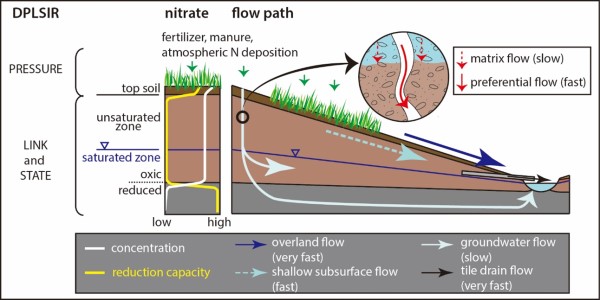 Lag times not only quantify the delay between the pressure stress and state response, but also reveal primary pathways of water and contaminants (Koh et al 2018). To recharge groundwater, water primarily flows vertically via matrix flow pathways and/or preferential flow pathways (Figure 2). This water eventually emerges in the surface water. Matrix flow is a pathway through pore spaces in the soil matrix. The lag times of matrix flow can be long (years to decades). Preferential flow is a pathway via macro-pores in soils and fractures in bedrock, bypassing a dense or less permeable matrix (Beven and Germann 1982, Hendrickx and Flury 2001). The macro porous spaces in soils can be created along root channels, soil fauna channels, cracks (i.e., freeze-thaw and wetting-drying), fissure, or soil pipes (Beven and Germann 1982). Preferential flow may be transiently active; however, it can deliver a significant quantity of contaminants with a very short time delay (hours~weeks) (Rosenbom et al 2009, 2008). Therefore, the groundwater table and groundwater chemistry of matrix-flow-dominated systems will exhibit relatively small variations and slow changes over time compared to those of preferential-flow-dominated systems.