As described in »Database development process, the database was not populated in the same way by all the partners. Several limiting factors and issues were identified throughout this research task.

When it is needed to compare a state indicator against a pressure indicator, the first question to ask is generally the scale of work. According to a hydrogeologist, the best scale is the catchment area because it represents a homogeneous zone that collects water flows. A catchment area is a physical extent based on hydrogeological/hydrologic data that cannot easily be linked to administrative or agricultural pre-existing territorial divisions. It is indeed often complicated to have access to farming data matching the catchment area. And thus, data from larger territorial divisions or smaller divisions frequently have to be used.

One possibility is to use data from scales smaller than the catchment area: generally data at the plot scale. However, listing plots is not the most time-consuming task. In a first approach, we asked for data at the plot scale but collecting data at this scale was not feasible in most case studies. Even if the case study leaders were able to collect the location of plots, collecting the rest of the data we asked at the plot scale was too time consuming. Notably, collecting soil occupation or fertilisation data at plot scale was too time consuming in many case studies, especially in the largest ones such as Arges-Vedea, RO. Some partners had to find alternative ways to define a much smaller sub-catchment to fulfil the task at this scale (Anglian Region, UK).

The problem of the plot scale, even if it gives an exact detailed representation of the catchment, is thus that it requires too much effort to collect data at this level of precision for indicators such as crop type, fertilisation and crop yields. The efforts are even more important in a deeper, more inertial aquifer since the data will need to be collected for several years or even decades. (For example in Anglian Region, UK it has been a challenge to collect the data, not helped by all of the people who collected the data c.20 years ago having either retired or died.) The partners that fulfilled this task with the more ease had started working in the study site before FAIRWAY and had already started collecting some data.

One might ask why so precise and hardly reachable data was asked. The fundamental reason is that in Monitoring & Indicators we aimed to select the best (scientifically-sound, fast-responding, and intuitive) indicators to be used by “local” stakeholders in the decision making processes. Therefore, datasets that can precisely illustrate the cause-effect relations at the local level where needed. In this part of FAIRWAY we worked at the catchment scale while other research tasks worked at regional or national scales. A second reason why precise data was asked is that most indicators could be reliably tested only if the input data was precisely known.

Plot scale data are, since 2016, even more, problematic to handle. Many member states protect the personal data. This includes the farming practices data since, in many cases, they are linked to a plot and thus to a farmer. Until 2016, this general statement could have been circumvented under certain conditions for a research project. However, in 2016, a new regulation on data protection (EU 2016/679) was enforced. Questions on confidentiality of farm data, therefore, arose in conjunction with the beginning of FAIRWAY. For instance, the Lower Saxony, DE found no possibilities to send data at the plot scale. Note, this is not issue due to data collected at the plot scale but it could be at the farm scale also. The Overijssel, NL case study was not allowed to share private data (including nitrate concentrations) of farmers.

Many case studies are not even catchment areas but are larger (Figure 10). These case studies are larger areas defined for a specific need with a certain homogeneity (farming practices, geology). These large parts of territory include several abstraction wells. 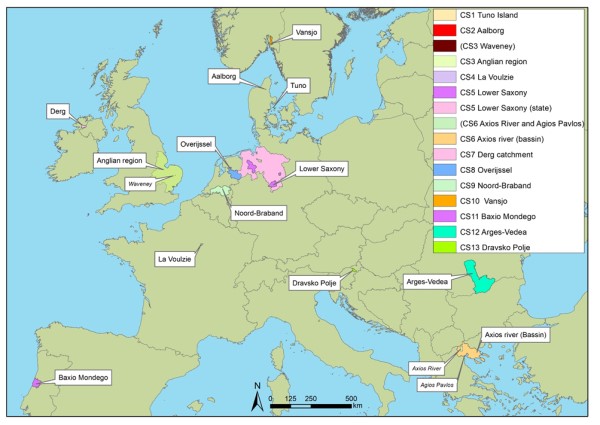 For instance, the Lower Sazony, DE case study is based in a Federal State project on manure treatment and export from intensive animal production (north-west) regions to regions with arable farming (east). The main partner was the Lower Saxony Chamber of Agriculture. A large territorial scale is needed to exchange manure between areas. The Anglian Region, UK casse study comprises three quite small areas within the Anglian water areas within the larger Anglian Water Drinking Water company total area. All areas are independent surface water catchment within the same region geographically so similar altitude, latitude, rainfall, farming pressures. The water company area is one of the reasons why the case study has a large territorial scale.

When having a very large case study, more data (about water quality and farming practices) must be collected to properly calculate pressure indicators. Not all of the abstraction wells within the study area will necessarily have the same trends in pollutants, so different ways to apply indicators in these cases have to be used. This scale of work is designed to get large Multi-Actor-Platforms and the territory needs to be split to understand the impacts on each abstraction well. But in such MAPs, there is no desire to share/divide the territory into smaller parts: the MAPs are built to be large enough to create a momentum that can gather local stakeholders' goodwill and significantly impact the environment.

It was envisaged in the early stage of FAIRWAYto use European Databases to fill the database when local data sources were missing. As explained above, using too-large-scale data is not feasible. The European databases providing data at the national scale were thus discarded.

However, it is possible to use default values at the regional scale. For instance, data from the EMEP MSC-W model database could be used for atmospheric deposition (see »Database development process). Moreover, the European database also can provide data at the local scale. For instance, reports on water quality are published on the EIONET Central Data Repository website (EIONET Central Data Repository website: http://cdr.eionet.europa.eu/). This data is sometimes public. Data available for La Voulzie, FR, North Greece, GR and Dravsko Polje, SI were downloaded to test whether this data could easily be used. Those countries were tested because their data was public.

Thanks to the EIONET database, ten years of NO3 concentrations dataset with a yearly time step could be obtained for the Slovenian case study. In many other case studies, very little data is available (i.e., few years only) or data is not available. We contacted the EIONET team to have access to more data, but we would have to contact each member state services independently to have more data.

The EIONET / EEA website (EEA website: https://www.eea.europa.eu/data-and-maps/data/waterbase-water-quality-icm) also provides data for many surface water and groundwater points between 1960 and 2017 for almost every member state. Each point has its own pattern of data. A point could have one data only, whereas another one could have ten data gathered in the 1990s. No regular pattern could be observed. Data covers substances like nitrate or some pesticides, but the database also contains data about pH or conductivity. However, as explained above, inconsistency in data collection patterns often jeopardize the construction of time series.

3. Timescale of the monitoring data

Another major issue in the collected data is the limited time span of the indicator data. In some cases the sites are being followed for a long time (e.g., >50 years in La Voulzie, FR), whereas in other cases the sites were followed for a couple of years only (e.g. <10 years in Derg Catchment, UK). Moreover, for the most effective use of the database, it is further needed that time series share a long period in common. This is notably required to allow cross correlation analyses of pressure and state indicators with the consideration of response lags that can be long (>5 years and even >10 years in several cases) when the studied aquifer system is large and/or inertial (for example see »Using the database: cross-correlation analysis).

The FAIRWAY consortium comprises many different institutes, each of them having its own field of work. None of the project partners had in its regular missions to collect both farming practices (Pressure Indicator) and hydrogeology/hydrology data (State Indicator).

In the case studies, organisations generally rely on a third party to get their missing data. For instance, BRGM (La Voulzie, FR case study) manages the French national database on groundwater quality, giving easy access to data on contaminant concentrations in groundwater. However, it still had to ask the catchment manager (Animateur de bassin) to access farming practice data. A project on this topic had started earlier (in 2015) in La Voulzie so data had already been exchanged, and data for the missing recent years was easy to acquire. AFBI (Derg Catchment, UK case study) and GEUS (Island Tunø and Aalborg, DK case studies) were involved in projects on their case studies that started before FAIRWAY and had already begun to collect data. They had little difficulty providing data to the database.

Some other partners did not have a prior project on their case study, so it was a long task to get data outside their usual field of work for their case study. First, a third party had to be identified, and then appropriate requests had to be made. The larger the catchment/case study area, the less likely the answers from the third party were positive since the work of data collection involved would have been too important (see »Definition of boundaries).

Access to a third party that can provide extra data is a key problem. Institutes (research institutes, universities or private companies) specialised in a given field of environmental sciences or management generally have easier access to the data or the third parties with the data on their area of expertise. Just knowing that a third party has the data is not enough, though, to convince the third party to share the data for a project in which he is not involved.

The Lower Saxony, DE case study is involved in the pre-existing project on manure treatment and export. The partners (University of Thünen and Chamber of Agriculture) could not supply information on the water quality of specific wells without asking a third party outside the project. Two attempts to collect data with the help of the water supplier “OOWV” were made: first, the record time scale of the data (about 15 years) was not sufficient, as water transit time was more than 30 years. A second attempt was thus made with another catchment. But data of this very small catchment did not show a good response to mitigation measures by farmers in the related cooperation area.

For new case studies and new MAPs, especially the largest ones (e.g. North Greece, GR) it was unachievable to collect farming practices data at the plot scale. Either because they could not collect data themselves or because they did not find a specialised third party that could have carried out the task for them. As reported, case studies could have difficulties getting access to the data outside of their field of work. On the other hand, they have easy access to data in their field: for instance, they know which national databases contain relevant and readily usable data. Moreover, they have easy access to all data they have already collected. For example, the Overijssel, NL provided us with a complete database of piezometric head data also available online from a Dutch website (only a sample was included in the FAIRWAY database).