The main aim of this part of the research was to obtain a feedback on the evidence-based practices in the different FAIRWAY case studies to improve water quality. The evaluation of the main findings of discussions with actors in the project’s Multi-Actor Platforms (MAPs) was done, using paper questionnaires. The questionnaire aimed to evaluate possible correlations between the EU and local level on barriers and issues in providing integrated scientific support for policy regulations related to drinking water resource protection against diffuse pollution of nitrates and pesticides from agriculture.

The questionnaire included four blocks. The first and second blocks focussed on nationality and stakeholder groups, respectively. The third block dealt with barriers and issues concerning integrated scientific support between the national and local level. Moreover, the fourth block focussed on the improvement of the system; what are the possible solutions for integrated scientific support for policy on protecting drinking water resource against nitrates and pesticides pollution. Finally, 30 questionnaires were supplied from seven MAPs, coming from seven countries: United Kingdom, Slovenia, Portugal, Germany, Netherlands, Ireland and Romania. MAPs are conducted of different stakeholder groups and involve case studies and national authorities. The representatives of the different stakeholder groups that were asked to fill out the questionnaires are not necessarily experts in the field of protecting water resources. They are within their professional duties involved in the process of making decisions or otherwise influencing how to maintain drinking water resources protected on a daily or regular basis. Selected representatives gave as a survey sample of important actors involved in different fields of the protection of drinking water resources.

MAPs were asked to decide how much could they agree or disagree on the Likert scale of 1 to 7 for different issues that EU representatives recognised as necessary for the protection of drinking water resources. The average Likert scale for these issues was always higher than 60 %. Stakeholders recognise that these issues are also important in their local environment. However, specific issues are considered as not essential or not evenly important between stakeholders (fragmented data). The issue: “Patience is needed to see results (change policy takes time)”. Development is already positive” is highly agreed by all presented MAPs (Figure 1). 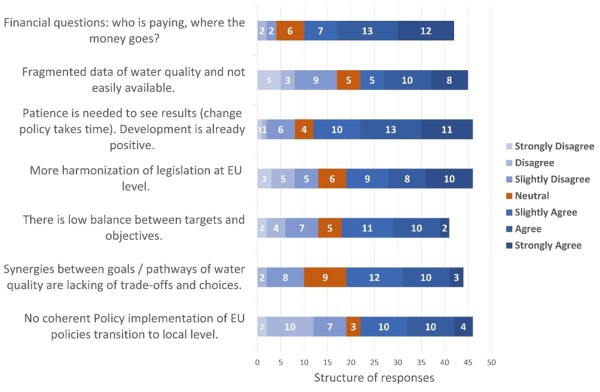 The results of the assessments show a higher average of Likert scale with the statements on barriers that are present in solving the issues concerning the protection of drinking water resources on the local level. The agreeability among MAPs was highest for the barriers: there is a time lag between action (measures) and results (water quality), farmers are not enough involved; raising awareness and communication is needed and limited financial means to apply measures by farmers, water sector, consumers. These results imply that EU representatives should work on solving these barriers because they were uniquely recognised among different MAPs and different stakeholder groups.

In the third part, results show a high average of Likert scale with statements concerning the actor's issues of science integration into policy on the local level. The average was between 71 and 86 %, which means that this are recognised issues also at the local level and not exclusively at EU. CV ranged between 18 and 30 %, which gave in most cases satisfactory unified opinion on the matter. Integration of science into policy is quite a challenge in all MAPs in the sample.

Two issues of integration science into policy have higher agreeability among all MAPs:

The first one is very general. However, the second one is particular and gives a good sign that FAIRWAYs conceptual framework is recognised as the right solution at all MAPs in the sample and show need for integration of science into policy.

MAPs were also asked of their opinion on solutions for better integration of science into policy. There was a high average of Likert scale for all statements, except for the solution Separate Pesticides and Nitrates in projects and policy communications. This statement had a CV of 45 %, and a relatively low average (63 %), suggesting that this solution is not a solution for all stakeholders and MAPs. Results indicate that if EU representatives seriously think about separating Pesticides and Nitrates in projects and policy communications, they should invite different MAPs to share their opinion on the matter and listen to them. The agreeability among all MAPs was highest for the solution: Stronger involvement of actors in the science-policy interface. Stronger involvement corresponds with a reflection on science integration into policy, where MAPs recognise that It is good that member states have a voice in solving problems on a local level; Multi-Actor Platforms (MAP) are the right way to engage stakeholders closely.

The primary goal of this part of the survey was to gain suggestions for direction and improvement and obtain a measure of the quality of interim findings of the Fairway project. The stakeholders were selected by their field of expertise in water policy regulations/protection and the Pesticides and Nitrate Directives of EU or field of involvement in protection/pollution of EU water resources or integrated life within water protection areas.

A survey was conducted based on a questionnaire for all stakeholders that received an invitation to the Joint Policy Conference meeting held in Brussels on 7th December 2018. This survey was conducted to measure the usefulness of interim findings of the project for different stakeholder groups, such as researchers, local, regional and national authorities, agro-industry, SMEs, NGOs and farmers.

Results show the following most useful interim findings of other sections of FAIRWAY:

The majority of responses on the Likert scale shows that the interim findings of the FAIRWAY project are useful to the respondents. However, the average of the Likert scale is higher when the findings are more precise, not so general, and therefore ready for further consideration.

The respondents recognised the following issues as a most problematic for inefficient projects dissemination followed through to EU: complex governance system where key measures are easily lost; often too academic terminology; not well communicated and not sufficiently bottom-up approach. Almost all of the answers offered for solving the problem of inefficient projects dissemination are equally selected among respondents, which suggests that the respondents recognise solving these issues in multiple ways and on multiple scales.

One of our most essential conclusions is that there is an absolute need to have a short key summary and important final project results and in a language understandable to policymakers. Most respondents decided that they strongly agree with this statement. The average of Likert scale was very high (6.16 out of 7). The number of responses for this statement was 25.

We presented a scheme of possible long-term relationship/communication flows between research projects and political agenda to respondents. The analysis showed that 86 % of respondents agreed with this solution.

Finally, the respondents were also asked how they like to receive interim and final project’s findings. The respondents agreed that the most effective way to receive the interim findings of the project is presentations at a conference/workshops or via executive summaries of deliverables. The final results of the project can be best communicated via executive summaries of deliverables, and secondly conference/workshops, articles in scientific journals and YouTube videos.

The main findings from discussions with actors are that stronger involvement of all actors in the science-policy interface is a solution for science integration into policy. Most respondents also agree or strongly agree that it is good that member states have a voice in solving problems on local level relating agricultural pollution of drinking water resources and that MAPs are the right way to engage stakeholders in this issue closely. However, the idea of separation of pesticides and nitrates in projects and policy communications has considerably lower support in the MAPs as on EU level.

In the second survey, the respondents stressed that there is an absolute need to have the key and essential final project results presented shorter and in a language understandable to policymakers. The idea of possible long-term relationship/communication flows between research projects and political agenda, including Taskforce water intending to design project clusters seems very useful to the vast majority of respondents.