Use of passive samplers in drinking water catchments

The FAIRWAY project explored the potential of passive samplers to monitor pesticide concentrations in real-world scenarios, both in surface waterbodies and groundwater. This leaflet briefly explores passive samplers and compares their use with that of spot sampling for routine water quality monitoring.

Spot sampling, coupled with laboratory analysis, is presently accepted as the standard technique for monitoring. However, spot sampling provides only a snapshot of the environment at a specific point in time and may miss episodic changes in pesticide levels in surface and groundwater in the intervals between sampling (Figure 1). 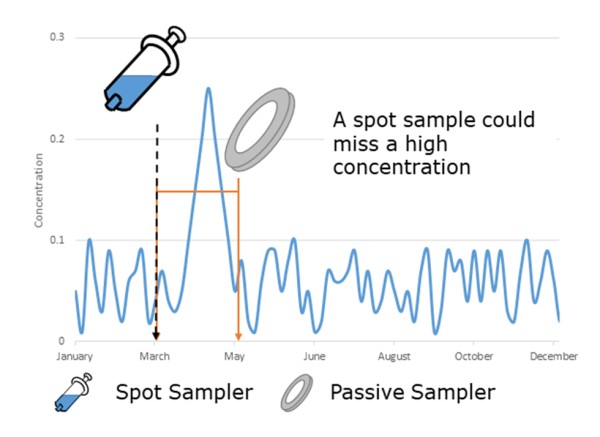 To reduce the non-representativeness of spot sampling, passive sampling techniques are an option. Passive sampling relies on the unassisted molecular diffusion of pesticides through a diffusive barrier onto an adsorbent surface over a prolonged period of deployment. These samplers are designed to maximize the mass of pesticide accumulated in order to detect the generally low levels of pesticide present in water.

Spot samplers may be used to monitor pesticide concentrations in both surface and groundwater, each of which poses technical challenges for deployment and retrieval.

POCIS™ and Chemcatcher® passive samplers are considered here, but there are other devices on the market.

The La Voulzie catchment area is a large-scale farming dominated catchment to the East of Paris. The table below shows positive detections of pesticides using POCIS™ passive samplers in water taken from two springs (raw water).

Period 2 and Period 3 have the same length, but the number of compounds accumulated is different. The difference in accumulation between deployment periods is influenced by water quality, which is influenced by variations in environmental conditions such as flow rate and the physico-chemical parameters of water (temperature, pH). For instance, atrazine has been banned since 2003 but significant seasonal variations were detected.

The results (Figure 2) also show that some pesticides, like boscalide, were quantified only during period 2 in the minor spring. They could have been missed by spot monitoring.

The Derg catchment is a grassland-dominated catchment in the north-west of the island of Ireland that frequently experiences very high concentrations of the herbicide MCPA (2-methyl-4-chlorophenoxyacetic acid). In this 16 month study a high frequency (7hrs in summer/daily in winter) spot-sampling campaign recorded 37 separate occasions when concentrations exceeded 0.1µg/L. Nearly 70% of these events lasted less than 24 hours.

Chemcatcher® passive samplers were deployed for 29 two-week periods across the study period and the time-weighted mean concentrations (TWMC) for each period were compared with those calculated for the High Frequency sampling (Figure 3).

Time-weighted mean concentrations determined by both techniques were comparable across a range of time-weighted average concentrations (the Y axis is on a log scale) for this combination of pesticide and hydrologically flashy river.

Research highlights: Use of passive samplers in drinking water catchments
Go To Top