Pesticides are an important tool in modern agricultural practice, but it is recognised that their use can have significant negative ecological impacts and pose risks for human health if not removed from drinking water sources. Whilst there are technological solutions available to remove the majority of pesticides from drinking water, these approaches are expensive and may not always be effective. Consequently, the use of professional pesticide products is strictly controlled, with usage limited to holders of, or those supervised by holders of, appropriate certification.

One challenge that is becoming increasingly apparent is that the infrequent use of pesticide products by many users means that adherence to best practice can be problematic. In addition, the best source of information is not always clear, or easily accessible. This problem is further exacerbated by the fact that pesticide usage is a practical process meaning that notes taken in training sessions are unlikely to be to hand when questions arise in the farmyard or the field. Modern tools such as mobile telephones and the internet provide a theoretical solution to this problem, but connectivity in rural areas, is often poor and many individual users still prefer a more traditional method for gaining information.

One of the aims of the FAIRWAY project was the development of a phone app that would provide guidance to users on the application, disposal and environmental risks associated with the use of different pesticides for weed and pest control.

The work was undertaken in a number of stages:

Market research was carried out in two steps. A review of the currently available online resources showed that there were a small number of resources available that specialised in providing information on specific factors relating to pesticide usage, but none sought to act as a centralised hub for all issues. Further, provision tended to target more frequent users and those who have recently purchased new equipment.

The second step was a series of structured interviews with 83 farmers who used professional pesticide products. The purpose of these interviews was to determine the specific mix of features that would increase the appeal of the app to potential users.

Building on the outcomes of the market research, the app development team, which consisted of scientists and software developers, determined that the most appropriate target audience for this app would be:

The development team then used a number of MoSCoW meetings (Must have, Should have, Could have, Won’t have) meetings to determine the content of the app. These are:

A series of wire-frame visualisations were then developed and presented to stakeholders representing agricultural interests, civil servants, academics and professional training bodies from across the island of Ireland, Great Britain and Europe in order to gain their feedback on content and presentation. 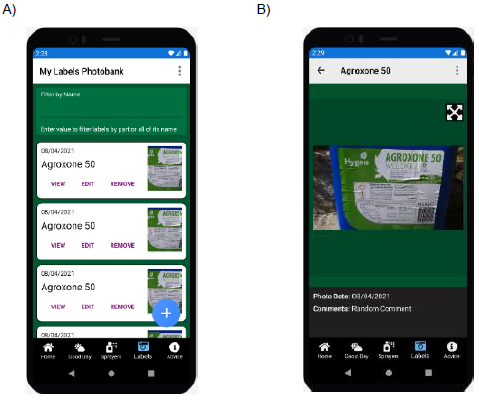 Following a final MoSCoW meeting, the app was developed to operate under the Android mobile phone software platform, which holds approximately 72% of mobile phone operating system market share. The working prototype was developed following industry standard software development lifecycle processes in line with internal best practices and procedures and using the Xamarin Open-source mobile app platform for .NET. An object-oriented approach to coding was taken where the different elements of the system were designed, coded and tested individually and then brought together to form the completed system. System testing was carried out using Android OS emulation software before the first round of user-acceptance testing. The App was named “Sprayday”.

The app was presented to 64 stakeholders from across the island of Ireland, the United Kingdom and Europe. Individuals represented a range of interest groups, ranging from civil servants to agricultural advisory service employees and from water utility employees to farmers. Several participants who had participated in the initial market research survey were included in this group. Overall feedback received was positive with more than 94% of respondents stating that they believed that the app was suitable for the target user groups. A number of respondents made it clear that they would prefer to see a more richly featured app that would provide users with the ability to generate the documentation associated with pesticide application, as well as storeroom records, as they felt this would improve the appeal of the app to the community. However, other respondents took exactly the opposite view, indicating that they felt that a simple app would be more appealing to the target audience.

Restrictions in 2020/21 due to Covid-19 meant that it was not possible to carry out a field trial of the app and there is a clear need for this work to be undertaken. In addition, future works should include the following components.

In conclusion the SprayDay app is a Decision Support Tool designed to target low-frequency users of professional pesticide products and assist with their adoption of best practice. There is a particular focus on providing information on the planning and execution of pesticide application. The app has been developed to approximately TL6 (Technology demonstrated in relevant environment) or TL7 (System prototype demonstration in operational environment) and has primarily targeted the Northern Irish/UK market but could be adapted for the international market as part of a programme of further developments focused on developing the app to TL9 (Actual system proven in operational environment). Reviews suggest that the app has successfully been designed to appeal to infrequent users (1 – 2 applications per annum) of professional pesticide products from both agricultural backgrounds and other business sectors, such as groundskeepers managing amenity spaces.

The authors of this report would like to acknowledge that the work presented here was made possible by the funding provided by the EU’s Horizon 2020 programme (Grant No. 727984). We would also like to thank colleagues from throughout the FAIRWAY project, members of the Water Catchment Partnership, the National Pesticides and Drinking Water Action Group, the Source to Tap project and members of the Business Support (Crops) group at the College of Agriculture, Food and Rural Enterprise (CAFRE) for their comments and suggestions throughout the design and evaluation stages of the app’s development. The gathering of opinions from potential users of the app would have been much more challenging without the assistance of the Source to Tap field officers and AFBI staff who gathered the opinions of today’s farmers, as well as Andrew Gracey (Ulster Wildlife) who introduced the survey to tomorrow’s farmers taking part in the “Grassroots challenge”, which they ran in association with the Young Farmers’ Clubs of Ulster. Finally, we would also like to thank all who gave their time to take part in the market research stage and/or the prototype review meetings at the end of the project.